Every December, I name a “Person of the Year” – the individual who left their mark on Canadian politics over the past year, for good or for bad. This isn’t an award for the best or the most admirable politician – it’s someone who had an impact.

No matter how you slice it, Justin Trudeau was the star of Canadian politics in 2015, and the man who left the largest mark. That’s a given. His win was historic. He defeated a united Conservative Party and a viable NDP, quintupling the Liberal seat total, and moving them from third to first. Anyone who claims the election wasn’t about Trudeau must have missed the tens of millions of dollars the Conservatives spent over the past few years trying to make the election about him.

But the one rule I have for this yearly post is that the Prime Minister (or in this case, Prime Ministers) is exempt. And given I happen to be working for him, it’s likely best if we just place Justin Trudeau and his team to the side, and look elsewhere for a candidate.

Mike Duffy, Aylan Kurdi, and Zunera Ishaq all had an impact on the political scene, but it’s hard to argue the election turned on the Senate scandal, refugees, or the niqab. Joe Oliver’s budget set the fiscal framework for the balanced budget debate and was a foil for Trudeau’s middle class message. But Oliver was merely the messenger (and not a very good one).

We could go round and round looking at the impact different individuals had on the federal election, but it’s hard to have missed what happened in Alberta earlier this year. Which makes my 2015 person of the year none other than Rachel Notley. 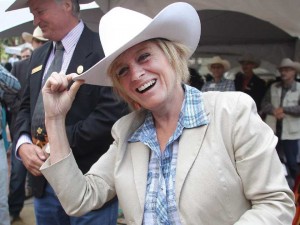 Alison Redford certainly didn’t help the situation when she expensed a $45,000 flight (plus that damn $25 luggage fee). Exit Redford. Enter Jim Prentice, who soared to a 20-point lead in the polls on the strength of two popular policies:

1. Scrapping an unpopular plan to redesign Alberta license plates.
2. Not being Alison Redford.

So did a snap election, on the heels of an unpopular budget.

Up to now I’ve been building a stronger case for Jim Prentice as person of the year, by detailing how the PCs defeated themselves. But the PCs had done a fairly good defeating themselves in the lead up to the 2008 and 2012 elections too. The reason they survived is that Kevin Taft and Danielle Smith were not judged as viable alternatives. Rachel Notley was.

Notley won in places where NDP candidates haven’t gotten their deposits back in generations, by presenting a moderate platform. She convincingly sold controversial planks on corporate taxes and the oilsands. She filled change voters with confidence not just that she would bring about change, but that she could handle the job.

Knocking off Canada’s longest serving government is probably enough to make Notley the person of the year, but it’s worth reflecting on what her win did to the federal dynamic. Even though Notley made Tom Mulcair feel about as welcome in Alberta as a Canucks fan during the provincial campaign, the Alberta NDP’s victory vaulted the federal NDP to first in the polls overnight. While this didn’t ultimately usher in a new orange era nationally, it would be curious to peer into an alternate universe where Notley came up short, to see if Mulcair would have taken more risks had he entered the campaign in third rather than first.

Regardless, as a progressive voice in what has traditionally been a conservative province, Notley will certainly be a star on the federal scene for years to come. Her ambitious climate change announcement shows she plans to use her historic win to make history, even if it means taking risks.

It also turns the national debate around pipelines and the environment on its head, making consensus on both these files far more likely than they would have been under a Prentice (or Jean) administration.

Notley’s win completely changed the way the rest of Canada sees Alberta. Along with Don Iveson, Naheed Nenshi, and a quartet of new Liberal MPs, Notley is now the new face of the “new Alberta”. That makes her the face of 2015.

Alberta Politics, Person of the Year
Rachel Notley
You are not authorized to see this part
Please, insert a valid App ID, otherwise your plugin won’t work correctly.