It’s that time of year again when everyone picks their person of the year…or cops out and does something incredibly lame. So, always one to follow suit, it’s time for the prestigious Calgary Grit person of the year selection. As was the case over the past three years when Michael Ignatieff, Belinda Stronach, and Ralph Klein were crowned, this doesn’t go to my favourite politician, the best politician, or even necessarily a good politician. It goes to an individual who had a big impact on Canadian politics. And, when possible, I try to resist the urge to go with the big party leaders in Ottawa because that’s a bit easy. So, without further adieu, votre gagnant: 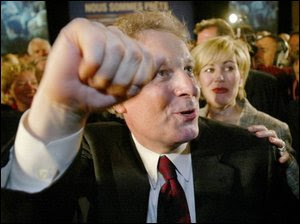 Despite all the election speculation and viciousness in Ottawa, 2007 in Canadian politics was all about the provinces with six provincial elections and a new era of inter provincial bickering. And while a good case could be made for crowning Dalton McGuinty, Brad Wall, or Danny Williams, much like Forrest Gump, Jean Charest just seemed to be in the centre of everything this year. Hell, he even made a cameo appearance or two in the Mulroney-Schreyber affair. The debate on reasonable accommodation that spread across Canada was at its most intense in Quebec, with Charest establishing the Bouchard-Taylor commission to study the issue.

On the national stage, Charest’s drive for re-election led to a massive influx of cash from Ottawa to ensure the election of the most federalist Premier in Stephen Harper’s lifetime. When Charest turned the cash around into a 700 million dollar tax break in less time than a Gilles Duceppe leadership run, he pretty much exposed the fiscal imbalance hype as being nothing more than a mythical creature. It also set off a new round of bickering between the provinces and Ottawa that featured attack ads and lawsuits. And, if the polls are to be believed, the tax cuts were about as popular in Quebec as they were outside the province, nearly threatening to bring down his government a few weeks after the election.
As for the election itself, it was far and away the most interesting of the six, with three parties legitimately in the game. The ADQ was on the rise led by Mario Dumont and the PQ was floundering with Andre Boisclair, the biggest bust to come out of Quebec since Alexander Daigle. And while it’s hard to claim victory when a majority turns to the slimmest of minorities, Charest

did manage to hang on. If you’re someone who watches politics like sports (and you probably are if you’re reading this blog), it doesn’t get much better than the 2007 Quebec election.
And that’s why Jean Charest was the Man of the Year in the eyes of this blogger.

Featured Posts, Person of the Year
Jean Charest
You are not authorized to see this part
Please, insert a valid App ID, otherwise your plugin won’t work correctly.