As 2011 winds down, it’s time to pick a Calgary Grit Person of the Year for the 8th consecutive year. The criteria is simple – someone who made an impact on the Canadian political scene in 2011.

While I usually try to think outside the box on these picks, this year’s selection is about as obvious as they come. In effect, I think it’s the first time I’ve been on the same page as the Canadian Press. But before we get there, a few runner-ups.

In any other year, provincial politics would have been the story, as political junkies in nearly every province got their fix. In Saskatchewan, Manitoba, Ontario, PEI and Newfoundland, incumbent governments were returned to power in a series of fall elections that ranged from “boring” to “painfully boring”.

More exciting may have been the provinces who didn’t go to the polls. In British Columbia, Christy Clark become Premier by taking the BC Liberal leadership race over Kevin Fallon 52% to 48% on the third ballot. She promptly called a referendum where voters “extinguished” the HST.

In Alberta, you needed a program to keep track of the floor crossings, new parties, and surprise resignations. When the dust settled, Alison Redford emerged as Premier.

In Quebec, François Legault founded a new party and surged to first in the polls on his bold promise of not being Jean Charest or Pauline Marois.

So yes, Redford, Clark, McGuinty…a case could be made for any of them as the person of the year. Just not this year. 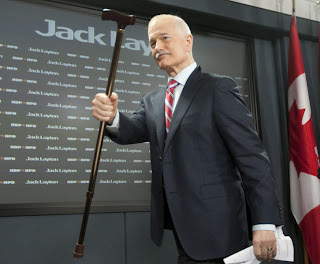 There are few politicians who ever get the chance to go out on top. Sadly, Jack Layton did just that in 2011.

If we rewind back to the start of 2011, Ottawa was busy playing its favourite “will they or won’t they” game of election speculation. Between Bev Oda’s problem with “nots”, the Conservative Party’s problem with the rules of Parliament, and Bruce Carson’s problem with escorts, the opposition parties smelled blood in the water. The Liberals had made it clear they were ready to vote down the government and Gilles Duceppe, knowing he was guaranteed at least 40 seats in the subsequent campaign, was set to force an election unless Stephen Harper gave him $5 billion for equalization, a new hockey arena, and daily piggyback rides around the House of Commons. Harper said he didn’t want an “unnecessary election” but his eyes said “yes”.

So it was all up to Jack. Layton had often mocked the Liberals for propping up the Harper government, only he himself tended to come down with a case of “making Parliament work” every time the Liberals found a backbone. Complicating the situation was hip surgery that left him needing a cane to walk.

Layton ended all the speculation 5 minutes after Jim Flaherty’s budget speech, passing immediate judgment on the Harper government. We were off to the poll yet again, for what most figured to be a boring campaign with few surprises. The funny thing about surprises though, is that they tend to be unexpected, by definition.

So fast forward to April 12th, in a 70s-themed debate studio, when Jack Layton pulled off a tour de force. Barely able to stand without sweating a month earlier, Layton stood tall for two hours. Many of his lines were tacky – I rolled my eyes when he uttered “hash tag fail” and when he told Stephen Harper “you’ve changed, you used to care about the environment“. But he connected with voters, both in terms of style and content, and left Michael Ignatieff reeling when he brought up the Liberal leader’s less-than-exemplary attendance record. In 30 seconds, the great Michael Ignatieff experiment (and possibly the Liberal Party) was effectively over.

Layton was good the next night in Quebec, but he didn’t need to be. He’d already made waves cheering on the Habs at local bars and everyone in Quebec was talking about his performance on tout le monde en parle. Layton soon overtook the Bloc in Quebec and, par conséquent, the Liberals. From there, all he had to do was surf the orange wave to Stornoway.

So by May 2nd, it was already obvious Jack Layton would be the newsmaker of the year. He had taken the NDP to record heights and done what Ed Broadbent and Tommy Douglas could not.

You all know the rest of the story – the tragedy and the tributes – since it dominated the headlines in August and September. Even beyond the grave, Layton left his mark, with the NDP making gains in most provincial elections. His departure also launched the NDP leadership race, and made the Liberal and Bloc races somewhat more meaningful.

Although Jack is gone, he’ll continue to have a major impact on Canadian politics for years to come.

Featured Posts, Person of the Year
Jack Layton
You are not authorized to see this part
Please, insert a valid App ID, otherwise your plugin won’t work correctly.