Trudeau’s Win by the Numbers 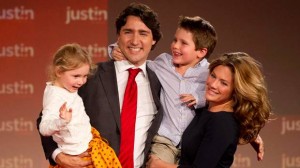 So rather than rehash what has already been written, allow me to provide the cold hard numbers behind his victory.

That’s more than voted in the most recent NDP (65,108) or Conservative (97,397) leadership races – indeed, it might very well be the most Canadians to ever vote directly for the leader in a federal leadership race. I say “federal”, because, despite what was claimed earlier today, the 2006 Alberta PC leadership race drew 144,289 votes.

Either way, I wouldn’t read too much into this. Both the BC and Alberta Liberals had high turnout leadership races in 2011, and it doesn’t appear to have translated to general public support. But at the very least, Justin Trudeau now has a lot of semi-engaged Liberals to draw from for donations and volunteers.

It’s difficult to compare this total to delegated conventions – especially delegated conventions from the good old days. But, for fun, Trudeau’s first ballot support ranks behind Martin (94%), is comparable to Pearson (78%), and is decidedly ahead of St. Laurent (69%), Chretien (57%), Turner (46%), King (36%), the other Trudeau (32%), and Dion (18%). Trudeau performed slightly better than Stephen Harper, who received 69% of the votes and 56% of the points (after they were weighted by riding) in 2004.

If you look at the Intrade stock for a Trudeau victory, it ranged from 75% to 91%, showing that at least some people were willing to bet against him. Back in December, I asked readers of this blog to offer their predictions on the race, and while every entry except one had Trudeau winning, he was only given an average score of 41% on the first ballot. Remember, these are people who follow politics closely.

Even a few days ago, my poll of readers predicted an average first ballot figure of 65%, and only one-in-ten thought he’d crack 80%.

Of course, the support was always there, even if we didn’t all see it. But speaking as someone who was convinced to vote for Trudeau based on his performance during this race, I think the candidate and the campaign deserve a certain amount of credit for the magnitude of his victory.

ABOUT THOSE POWER RANKINGS

Here are my final Power Rankings, with each metric converted to a percentage:

Even though these power rankings weren’t intended to predict first ballot support, they came within 2 percentage points for every candidate:

I’m sure some of that is luck, but this is definitely an exercise I plan to continue on future leadership races.

15 responses to “Trudeau’s Win by the Numbers”