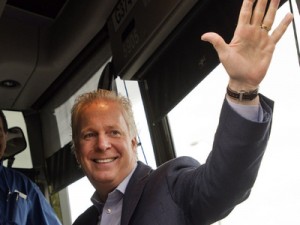 The headlines haven’t been kind to the outgoing Premier this morning: Jean Charest’s luck finally runs out, Charest’s Gamble Costs Liberals, Charest Has Only Himself To Blame For Quebec Election Defeat. I suspect many of these post-mortems were written before the votes rolled in last night, because the end result tells a far different tale – the Liberals finished within 1 percentage point and 4 seats of the PQ.

This wasn’t simply a case of “sauver les meubles” – a few votes here and there, and the Liberals could have pulled it off. Had Charest held his own riding, we’d be speculating about him trying to cut a deal with the CAQ to stay on as Premier. That he came so close is remarkable, and not just because most polls and seat projections had the Liberals going down in flames.

The reality is, few governments are given a fourth term – especially governments at the center of a public inquiry into corruption. The conditions were ripe for a crushing PQ victory, or for the CAQ to relegate the Liberals to third party status. Instead, Charest has left his party well positioned for a return to power in a few years, should be PQ flounder. Admitedly, the Charbonneau inquiry could taint the Liberals, but by punishing Charest yesterday, the electorate might be more willing to give his successor a clean slate.

I won’t pretend Charest’s record as Premier is spotless. On most issues, he’s been a disappointment, and he leaves the province in a financial mess. However, he was drafted as PLQ leader with a mission statement to “save Canada” and, on that score, he fullfilled his mandate. The proof of this is that the PQ victory that swept him out of office has been met not with the usual national panic, but with a giant shrug. A CROP poll last week showed support for separation at 28%, and Marois doesn’t have the votes in the House or in the streets to call a referendum.

While Charest lost the election and lost his seat last night, he still exits a winner, having secured his legacy.