I must say I was quite disappointed today. I’d heard that Harper would be flipping pancakes at two breakfasts in Calgary this week and was expecting a lot of material for the Glad as Hell Tour updates. But I have yet to see any news stories recapping the events.

Then, lo and behold, Warren digs up a great picture of Harper from the Stampede parade on Friday. So, although I have no eye witness or news accounts of Harper’s time in Calgary, given his lack of predictability I feel confident giving a full recap of the event. Besides…if he’d, like, you know, bludgeoned Jim Prentice with a spatula, we likely would have heard about it. 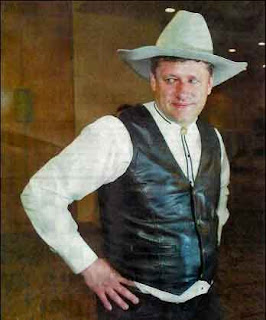 Location: Calgary, Alberta. (Harper no doubt wanting to convert the final 7 non-Conservatives left in the city)
Positives: Resisted the overwhelming urge to wear the matching assless chaps for his outfit. Also, no media attention means no one in Toronto saw the words “Stephen Harper” and “Calgary” and “cowboy” together in one sentence. Which is likely a good thing for a guy still carrying Reform Party baggage.
Negatives: I know people say he wears suits to often but…I’m not sure this outfit is really the look he’s going for.
Human Index: The cowboy outfit moves him above Johnny 5, but he’s not quite at Agent Smith level yet. So, he gets level 4.5 – Bender.