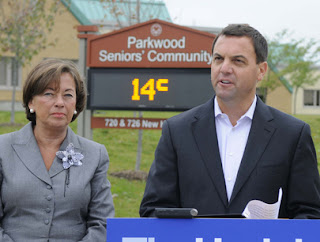 As I wrote on election night last fall, the line between majority and minority isn’t as rigid as it’s often made out to be. When the margin is this thin, one case of appendicitis can tip the scales and change the course of history.

On Friday, Dalton McGuinty proved how fluid that majority line is, by appointing veteran PC MLA Elizabeth Witmer as the chair of the WSIB, setting the stage for an “all in” by election in Kitchener-Waterloo, and hundreds of “battle of Waterloo” metaphors.

It’s hard to see this move as anything other than a minority masterstroke by McGuinty. Witmer is respected and more than qualified for the position he is appointing her to, so there’s little risk of  backlash. It undermines Hudak’s leadership and, most importantly, opens up a winnable by election seat for the Liberals. Here’s the KW vote totals from October:

An MPP with over 20 years in office has to be worth at least 5 points at the ballot box, making Witmer’s old seat very much a toss up. It’s a riding Andrew Telegdi won handily for the federal Liberals as recently as 2006, before razor-thin losses in 2008 and 2011.

While there’s no doubt a temptation to strike early and call a snap by election, McGuinty has the cover of the NDP budget deal to get him through the spring session, so there’s no immediate rush. After all, it’s a student riding, so there’s something to be said for a fall by election, when thousands Waterloo and Laurier students notice a cool 30% reduction on their tuition bills.

Regardless on timing, the election is going to be all about whether voters want a majority or a minority government. For the next few months, the eyes of the province will be on Kitchener-Waterloo.