I’ve already written about the difficulties of using seat projection models due to the unique circumstances of this Alberta election. So rather than crunch the numbers, I thought it might prove more useful to conduct a “wisdom of the masses” exercise, by looking at the predictions being made in  the Great Alberta Election pool. Here’s what the nearly 100 politicos who have entered so far are expecting tomorrow: 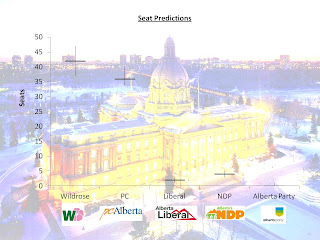 The above graph shows the median prediction for each party, with the bars representing the first-to-third quartile range – that is, where the “middle half” of all entries fall. Looking strictly at the means, we get a “best guess” of 42 Wildrose seats, 37 PC seats, 4 NDP seats, 3 Liberal seats, and 1 for the Alberta Party. That’s a slightly narrower gap than my prediction of WR 44, PC 35, NDP 4, Lib 4, AP 0 – and it suggests there’s some skepticism out there about Smith’s ability to seal the deal. After all, three-in-ten respondents still predict a PC victory and only a minority (41%) expect Smith to win a majority.

Nine-in-ten expect Redford to hold her seat, but respondents are less certain about Raj Sherman (43%) and Ted Morton’s (19%) chances. It’s a little counter intuitive for Morton to get drowned in the Wildrose wave given he’d be right at home in the party, but I have a hard time seeing any PCs left standing in southern rural Alberta.

As for the Wildrose Party’s more colourful candidates, only 36% expect Allan Hunsperger (of “gays burn in hell” fame) or Ron Leech (of “being white is an advantage” fame) to be elected Monday. I’d be shocked if Hunsperger won, but Leech took 26% of the vote running as an independent last election – add in the Wildrose boost, and he seems like the odds on favourite to find his way to Edmonton, perhaps as Danielle Smith’s Multiculturalism Minister*.

Edmonton Glenora figures to be one of the most hotly contested seats – the PCs beat the Liberals by 100 votes last time, but both the NDP and Alberta Party are running strong candidates and have targeted the riding. And with the Wildrose’s Edmonton poll numbers, even they could pull it out on the vote split. This unpredictability is born out in the pool, where 56% expect the PCs to hold the riding, 21% (myself included) see it as an NDP pick-up, 11% pick the Alberta Party, 10% pick the Liberals, and 2% pick the Wildrose.

This being their first election, it’s difficult to know what to expect from the Alberta Party. Only one-in-three predict they’ll win a seat, and the mean guess on their best riding vote is 15-20%. That’s the most I’d expect them to get anywhere, but many pool entries had them winning multiple seats, and up to 40 or 50 percent of the vote in some ridings.

The Wildrose Party is predicted to pick up 1.7 of the 3 Senate seats. Personally, I expect a clean sweep – given the low level attention paid to the Senate election, I expect most will vote party lines.

Close to half (44%) expect Liberal leader Raj Sherman to announce his resignation within 48 hours of the vote – perhaps not surprising since most expect Sherman to lose his seat and just 18% think the Liberals will win more votes than the NDP.

One-in-three expect Redford to resign after the election – presumably not the same people voting for her as “the most progressive option”. Personally, I’d be surprised if any of the four opposition leaders are around come next election – hell, I’d be surprised if all four opposition parties still exist come the next election. But my best guess is that they’ll all take a bit of time before coming to a decision…or being forced into one.