Mulcair’s win was inevitable…but was it predictable? 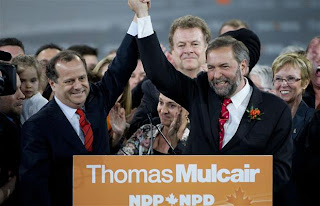 PunditsGuide concludes her top notch NDP leadership coverage with the vote breakdown of advance and in-person ballots. White Nathan Cullen “won” the convention vote, Mulcair had enough support among advanced voters that he could have dropped his pants and sung La Marseillaise during his Friday night speech, and likely still carried the day.

So the question is – if a Mulcair win was inevitable, was it predictable?

I compiled a series of 9 leadership metrics in the days leading up to the convention on attributes such as fundraising, endorsements, social media, and polling data. In my mind, this was a bit of a test drive for the Liberal leadership race, since I’d like to be able to post weekly or monthly “Power Rankings” during that contest, to gauge candidate support and momentum.

So here’s how the different indicators stacked up, sorted by their correlation to the first ballot results:

As has been the case in past leadership contests, polls among party members proved to be the most accurate prediction of candidate support. And remember, in this case we were dealing with a pair of month-old polls conducted by two of the leadership camps. Of the two, Mulcair’s proved to be more accurate – mainly because (surprise, surprise) Paul Dewar’s overstated his support by a factor of 2. Let that serve as a cautionary tale anytime you see an “internal” campaign poll released.

Endorsements also score well, using either a simple count of MPs, or 308.com’s more complex system. Mind you, Premier Mar and Premier Falcon will tell you how much endorsements can be worth in some contests.

Fundraising numbers were a good indicator of candidate support, though not as much as the 2003 NDP leadership contest when they had a remarkable correlation of 0.998. As has been the case with the other half dozen leadership races I’ve crunched the numbers on, the total amount raised seems to be a better predictor than the total number of donors. Goes to show money matters, even when we’re talking about socialists.

As for social media? It may play a big role in modern elections, but it’s certainly not a very good indicator of who’s in front. Language may have played a role in it, but Mulcair was 5th in terms of Facebook “likes” and was barely ahead of Niki Ashton when it came to Twitter followers.

Surprisingly enough, something as simple as the number of times a candidate is mentioned by the media proved to be just as good a predictor of support as the factors above. So while we all like to think the media has no clue what goes on during internal party contests, they were basically on the mark this time. Goes to show you there’s some truth behind what’s heard at Hy’s.

If we toss all these numbers into the regression wood hopper, the best prediction models weights endorsements, donors, polling, and media buzz about evenly, and explains 92% of the variance. That’s a good number, but my stats teachers would slap me if they saw me creating a “magic regression equation” based on 8 candidates in one leadership race. After all, each contest has its own rules and personality, and it’s foolish to think the Liberal race will look like the NDP’s.

Still, the signs that mattered most all pointed to a significant first ballot lead for Mulcair. We shouldn’t be at all surprised that’s what happened.