Ontario Budget 2012: McGuinty avoids war with Hudak and Horwath, by starting one with unions 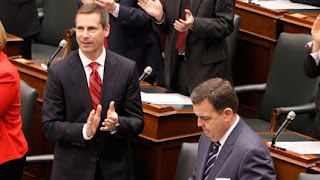 During the minority government era in federal politics, we all grew accustomed to the annual spring budget dance – a popular budget full of election treats, and never ending speculation over whether or not it would trigger an election.

Yet Dalton McGuinty’s first minority government budget felt different. Sure, Tim Hudak pushed out his chest and boldly declared he’d vote against it (despite not giving any kind of coherent explanation on how he’d balance the books). And yes, Andrea Horwath was not pleased and will now “consult” with Ontarians over what to do. But the reality is the NDP will support the budget, if only because none of the parties want – or can afford – an election.

The budget itself was decidedly “treat-free” – there’s not a single ounce of sugar in it. Not even a Harper-esque tax credit for buying sunscreen. Rather, the Liberal story of the budget was about what the government didn’t do – they didn’t scrap all day kindergarten, they didn’t cut Health Care, they didn’t increase class sizes.

Of course, if the benchmark is the Drummond Report, then what the government didn’t do, might be enough to help the public swallow this tough medicine budget. I feel like most Ontarians recognize tough decisions are needed, and the cutbacks and wage freezes McGuinty has proposed will be far less painful than Rae Days, tax hikes, or health care cuts.

Unless you’re in a union, that is. A public sector wage freeze is easier said than done, so Ontario is in for a year of labour unrest.

While McGuinty’s budget will ensure campaign signs stay locked up, it’s time to pull out the strike signs.