Redford in Dire Straits Over Money for Nothing Controversy 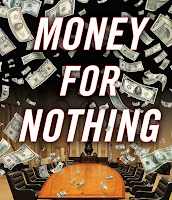 In 1993, the Alberta PCs were on the ropes, and many felt Lawrence Decore would end their 22 year reign in power. When the issue of MLA pensions bubbled to the surface, their newly elected leader Ralph Klein walked into caucus, laid down the law, and retroactively scrapped the gold-plated pension plan. He may not have made friends within caucus, but it was perhaps the most crucial decision he ever made as Premier, as it avoided a controversy that could very well have cost him the election.

Alison Redford now finds herself facing a similar controversy, but her response has been much weaker.

If you’re not familiar with this story, Alberta MLAs are paid $1,000 a month for their committee work…or in this case, lack of work. You see, the Standing Committee on Privileges, Elections, Standing Orders and Printing hasn’t met since a barn burner 14 minute meeting in 2008 (and 4 of those minutes were spent just reading off the committee name). In fairness, four years isn’t a lot of time in Alberta politics when de facto terms in office run 30 or 40 years – but even if we do some “dog year math” and divide that inaction time by 7, we’re still talking about about a lot of money for nothing.

It should be noted this issue isn’t a new story. Former Liberal leader David Swann has been donating his committee cheque to charity for years, and the Canadian Taxpayers Federation raised the issue back in January. Still, Redford can be forgiven for not proactively moving on this since, as her office commented when reminded she used to sit on the committee, “when she says she didn’t remember it is probably because it never met“. Fair enough.

However, the story gained new life on March 7th when the Taxpayer’s Federation presented the committee with a mock waste award, and the past two weeks have been a textbook case of how not to manage controversy.

Initially, Redford tried to stay out of it, letting it be known that each MLA would need to decide what to do with their pay. Of course, this left MLAs scrambling in twelve directions to justify themselves, without any coherent or consistent message:

[PC MLA Gennia] Leskiw said she doesn’t know how many committees she sits on and she couldn’t explain what the standing committee of privileges and elections actually does. When asked by reporters to explain the committee’s work, Leskiw was literally at a loss for words for almost five seconds before blurting out, “No comment.”

Asked if she was going to keep the $1,000 a month – or give it to charity as Liberal MLA David Swann does – she paused again before responding, “No comment.”

Asked if the committee should be scrapped because it’s not doing any work, she paused and said, “I have no opinion on that.”

And this, I should point out, was Leskiw’s second interview on the subject with reporters, after she had time to reflect on the subject and get briefed by staff.

Opposition MLAs had their share of stumbles out of the gate too but, before long, they one by one agreed to return the money. Two days after the story broke, Liberal leader and former PC MLA Raj Sherman returned over $40,000 in back pay – interest included.

Redford called these gestures “a stunt“, accusing her opponents of grandstanding – all the while freezing committee pay and hinting that PC MLAs who did not return the money would be “held accountable in the election”. She had somehow managed to hang her MLAs out to dry, while appearing to the public like she saw nothing wrong with the “pay for no work” committee.

Finally, two weeks after the story broke, Redford relented, forcing PC MLAs to return the money they had received since she became Premier – roughly 12% of their money-for-nothing pay. Her messaging didn’t exactly convey a sense of Redford acting decisively to do the right thing; the caucus chair abruptly announced he wouldn’t run again and Redford lamented that she couldn’t “change the past”. PC whip Robin Campbell was equally unconvincing:

“We understand that our system is complex and it’s pretty hard in 45 seconds or a minute to explain it, so we thought in the best interests of all Albertans that we would give the money back.”

In short – voters are too dumb to understand, and we just want this issue to go away.

The thing is, this is the sort of issue voters can understand. In addition to being a catchy song, “money for nothing” is an easy concept to grasp, and this story can be explained in 5 seconds. It strikes right to the “entitled to my entitlements” attitude voters loathe – especially from governments that have been in power for a long time.

That’s something Ralph Klein understood, but Redford has been slow to grasp.