The Fall and Rise of Dalton McGuinty 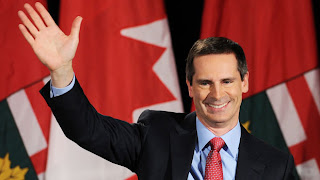 If I told you a few months ago there would be a picture of Dalton McGuinty waving on newspaper front pages October 7th, you’d have assumed it would be on the Sun, directly below a “GOODBYE! GOOD RIDDANCE!” headline .

After all, when the unofficial campaign kicked off this spring, McGuinty was 10 or 15 points down. You couldn’t turn on the TV without seeing a PC “Taxman” commercial. Over a dozen MPPs saw the way the wind was blowing and decided against running for re-election. Opportunists viewed a Tory nomination as the easiest way to power.

Yet Dalton McGuinty earned a rare third term last night. How the hell did this happen?

The first, and perhaps most important, decision of his campaign team was to highlight the Liberal record. Rather than going neg in response to the taxman ads, the Liberals ran a series of crisp and clean commercials featuring nothing but Dalton McGuinty talking about his record. The ad started with McGuinty sheepishly admitting he wasn’t the most popular guy in Canada, before making the case for re-election. The supporting arguments were easy to understand and were backed up with facts and figures.

The Liberals carried this largely positive tone into the fall. Important, considering the grumpy nature of the electorate and the dynamics of a three-party race – simply hitting Hudak over the head day in and out would have left Andrea Horwath free to pick up the pieces. By selling McGuinty, the Liberals were better able to capitalize on Hudak’s missteps.

And misstep he did. I’m not talking about the “foreign workers” slip, the homophobic pamphlet, or Cheryl Miller’s unfortunate case of honesty. Hudak’s biggest mistake was his campaign message, which could be summed up in four words – “taxes bad, McGuinty bad“. Yes, no one likes taxes. Yes, many agree McGuinty is the taxman. But Hudak wasn’t promising to remove the HST and McGuinty wasn’t promising to increase it. Sure, Hudak’s platform contained a few tax cuts in it, but he didn’t talk much about them and never really explained how he’d balance the books. Hudak’s campaign was curiously silent on all other issues – except for the all-important issue of BBQ abilities.

The Liberal campaign was equally focused and on message, but was cooking with more ingredients. They played to the Liberal strengths of Health Care and education, while promising new jobs. Their platform was more modest than their opponents’, so when the markets began to teeter, they were able to quickly pivot to the same “experienced leadership in uncertain times” pitch Stephen Harper rode to victory this spring. Let’s all say it together now – we need a strong, stable, Conservative Liberal government!

Now, I don’t want to oversell this – after all, the Liberal vote fell 5 percentage points, and they lost 17 seats. They barely got more votes than the Conservatives. It was a humbling result.

But McGuinty still won. He won by talking about issues that mattered to voters, and made a convincing case for why he deserved re-election. Tim Hudak talked a lot about about McGuinty’s shortcomings and talked a lot about “change” – but never articulated what it was he would change.

So while the end result may be a bit of a surprise, it shouldn’t be. The Liberals made a better case for why they should be in power than the PCs, and won. It’s as simple as that.