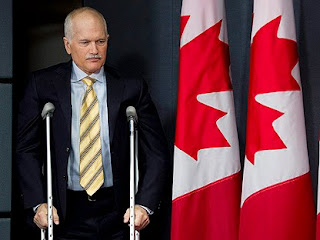 I don’t have much to add to the post-election discussion on the NDP’s past, present, and future, as most of the key points have already been beaten to death. But it’s worth a moment to pause and appreciate what Jack Layton accomplished last Monday. Layton inherited a party with 13 seats in the House of Commons, and took them to 19 seats…then to 27…then to 37. That, by itself, would have been impressive. Then, this election, he took a 50 year old party and not only led them to their best showing ever, he more than doubled their previous record of 43 seats.

Ten or twenty years from now, the words “Jack Layton” will appear under the NDP leader’s name on any Debate Bingo sheets or drinking game. Quite simply, Layton will now be a god to future New Democrats, the way Tommy Douglas currently is, and the way Ed Broadbent almost is. What he has accomplished cannot be understated in the least.

I start with this little ode to Jack, because the NDP’s success is owed entirely to him. I know that can be said of most parties in Canada, but this was a vote for Jack and Jack alone. And deservedly so, since his performance was masterful from start to finish.

I think back to the very first day of the campaign, when all three leaders faced difficult questions. The way they dealt with them foreshadowed what was to come. Harper simply refused to take questions. Ignatieff gave an incoherent answer to the coalition question, forcing him to clarify his position the next day. Layton faced difficult questions about his health with a smile and a joke – everyone seemed satisfied and that was the end of it.

And that was how Layton approached the entire campaign. NDP ads were as vicious and unfair as Liberal or Conservative ads, but they featured cartoons, and ended with Jack smiling and saying something that made you feel good about him. Every second word out of his mouth was an attack on Harper or Ignatieff, but he had a cheerful way of delivering his lines that made voters feel like he was running a positive campaign. In fairness, the other half of the words were positive, with promises to help seniors, hire doctors, and cut taxes. The math didn’t add up, but math doesn’t win elections.

The story was much the same during the debates. That was really when this campaign turned. His attacks were pointed and, unlike Ignatieff, they were on issues voters could relate to. Ignatieff’s attendance record may not have been the most important issue facing the country, but Layton put it in terms people could understand, leaving the Liberal leader stunned and speechless. In short, Layton gave voters everything they wanted in those debates – he looked like a fighter, he looked cool, he looked confident, and, most importantly, he showed how he’d make their lives a little easier. Voters started trickling his way soon afterwards and, once the people realized it was okay to vote NDP, the trickle turned into a torrent.

Layton’s biggest challenge in the coming years is to leverage his personal popularity to strengthen the NDP brand. After all, this was a vote for Jack, not a vote for the NDP – to form government and ensure the next NDP leader has a chance at forming government, Jack needs to get Canadians comfortable with the idea of voting for the NDP.

Doubts about the NDP’s ability to govern will only be heightened as his rookie caucus continues to make headlines for all the wrong reasons. After all, the media won’t be able to write election speculation stories any more, so the easiest way to get content for a column will be to stick a microphone in the face of one of the NDP rookies. Suffice to say, a crash course in media relations and the art of the “no comment” will be coming up.

Personally, I don’t have a problem with young MPs – it’s something we need more of, and it could actually prove to be a great way to get young Canadians interested in politics. I came within one floor crossing of being a placeholder candidate for the Liberals in 2005, so I’m open to the idea that these political rookies might actually be a breath of fresh air in Ottawa. If they handle themselves well, the media, and voters, will fall in love with them.

The larger concern for Layton is not so much the age of his MPs, it’s their beliefs. It wouldn’t at all surprise me if a dozen or two of the Layton Bunch are quasi-separatists, setting the stage for some very uncomfortable decisions in the years ahead. Layton’s position on the Clarity Act, Bill 101, and the Constitution is a ticking time bomb waiting to explode.

So there are challenges ahead for Layton and the NDP. If they look and sound like a government in waiting for the next four years, they might very well find themselves in power come 2015. If they don’t? Well, these gains could disappear as quickly as they materialized. 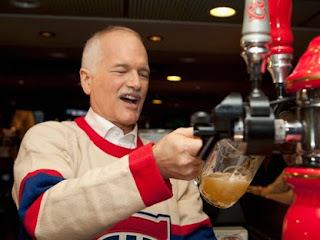