What’s the matter with Calgary?

You used to be cool. You were the conservative rebel without a cause. You welcomed George Bush and Sarah Palin with open arms. You could always be counted on for a good pro-Iraq war rally. Ann Coulter called you “the good Canadians”. 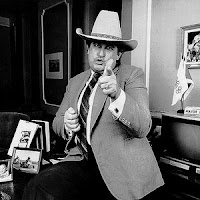 The man who embodied this Calgary image was Ralph Klein. He was your mayor in the 80s. By voting for Ralph in 1993, you saved Alberta from a Liberal government. You stood by your man even after the drunken visits to homeless shelters, after the plagiarism, after he heckled the AISH recipients. The rest of the country laughed at Ralph, but you didn’t care. Because, like Ralph, you were too cool to care. 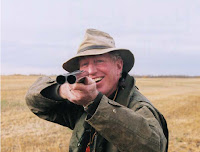 This all led to a good natured rivalry with Toronto. In 2004, Scott Reid famously said “Alberta can blow me” during the election campaign. A decade earlier, you’d pasted “Let the Eastern Bastards Freeze in the Dark” bumper stickers on your trucks. That was just the sort of relationship Calgary and Toronto have always had.

And you know what? The relationship worked. Calgarians hated the Toronto elites for their self-righteousness and their blind devotion to the Liberal Party, while the self righteous Toronto elites shook their heads and wondered what was wrong with those backwater Calgarians who would elect a donkey if you slapped a Tory logo on its behind.

But now, everything has gone topsy turvy. Here’s the Leger mayoral poll from yesterday’s Calgary Herald:

Nenshi has now rocketed to 30 per cent, tied with Higgins and just behind Ric McIver’s 33 per cent support, according to a Leger Marketing survey of 500 Calgarians conducted between Oct. 6 and 11.

Holy chinook?!? The “it” candidate in the Calgary election went to Harvard, ran a nonprofit, and blogs about the best ways to limit urban sprawl. Rosedale parents are going to have a hard time using that to turn their children against Calgary and scare them into voting Liberal.

Especially given what’s been going on in Toronto, where the front runner wants to limit immigration, says “oriental people work like dogs“, and has a record of DUI and assault charges so long it would make Ralph Klein blush. 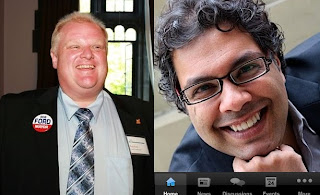 And it’s not just Naheed. The “conservative” candidate in Calgary’s mayoral election, Ric McIver, has staked out the conservative turf by…promising to raise taxes less than the other candidates. Hell, he’s been attacked by the NDP candidate in the race for wanting to spend too much on the airport tunnel. The guy isn’t exactly the president of Tea Party North.

The other front runner, Barb Higgins, is assumed to be progressive but, in fairness to her, that’s only because no one really knows what she stands for.

So Calgary, I’m writing you this letter as a friend. I feel someone has to let you know you’ve gone soft. Hell, you elected 5 Liberal MLAs in the last provincial election, more than “Redmonton”. Here’s an e-mail I got from a friend of mine in Calgary yesterday:

I for one, being a proud Western Canadian, welcome 4 years of insanity to the city of Toronto. I have always maintained that the real crazies in Canada live or reside in the city of Toronto, Mel Lastman proved that and may Mayor Ford continue that proud tradition.

All I know is that wack jobs like Lastman, Miller and Ford would never see the light of day in a sophisticated Canadian locale like Calgary, Alberta.

Is this how you want to be described Calgary? As “sophisticated“?

So I am begging you. To stop this insanity and preserve your reputation as Canada’s conservative bad boy, I am urging a massive “Rob Anders write in” campaign for mayor. You need to make this happen, simply to keep the natural order of the universe in balance.

Or else next thing you know they’ll be holding Pierre Trudeau parades down 17th Avenue and Stanley Cup parades down Yonge Street.