You never quite now what you’ll get at the Stampede. The boy from Calgary became a national laughing stock when he mistook the Stampede for a Village People convention in 2005. And the geeky Liberal pushing the carbon tax was named “best dressed” by both this blog and CP in 2008.

Of course, 6 months later Dion had been pushed out as Liberal leader, and 6 months after leathervestgate, Harper was Prime Minister. So it’s best not to read too much into this (unlike, say, a broken down bus which we all KNOW is directly linked to electoral fortunes).

Once again, we have a surprise winner this year in the “best dressed” category. Why, it’s none other than Mr. Ivory Tower Michael Ignatieff. The urban legend in Calgary is that no one had ever been able to find a cowboy hat big enough to fit Ignatieff’s head, but for the first time in five years he has moseyed into town in full gear, hat included, and he doesn’t look the least bit out of place. 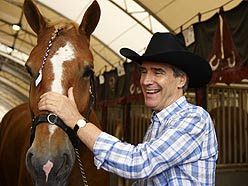 Wait, I thought he said he liked the smell of barns! Flip flop! 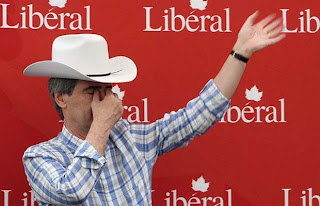 Layton and Harper have been to enough stampedes that we know what to expect from them. Layton always winds up looking surprisingly at ease for a mustached Toronto socialist. And Harper? Well, since leather vest gate, he always plays it safe and gets a C+/B- grade. The man never looks comfortable, but at least he doesn’t embarrass himself. 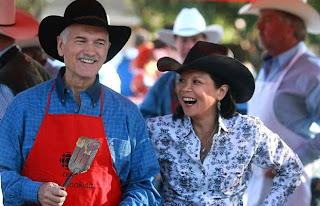 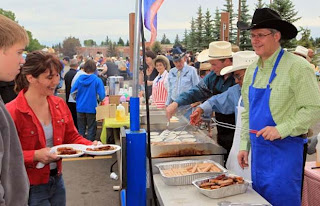 You know, despite all the talk of Harper playing chess, I’ve always thought his tactics were more of the “detonator” variety. Kelowna Accord? KABOOM! Census? KABOOM! Promises not to appoint senators? KABOOM! 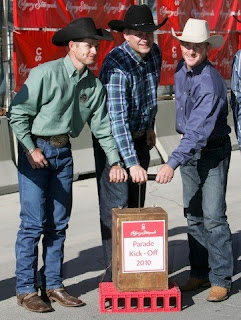 But if Harper and Layton have become too predictable, let’s all raise a glass of sillabub to toast Elizabeth May. Worst dressed in 2008. Best dressed in 2009. And this year? I’ll reserve judgement until I can find a picture of her before she tumbled into the tie dye trough. 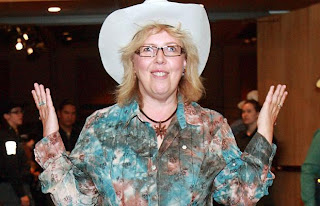 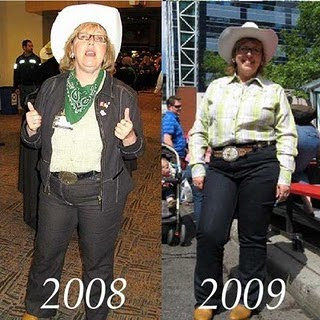 And, in the interests of by partisanship, a special shout out to stampede superstar Jim Prentice – yeah, he’s got a bad record as environment minister, but he rides a horse in the parade every year and looks like he could handle himself in the rodeo.

Prentice has a wide range out outfits and he makes them all work. And the ladies can’t get enough of Jim’s talk of voluntary 40 year emission reduction targets. 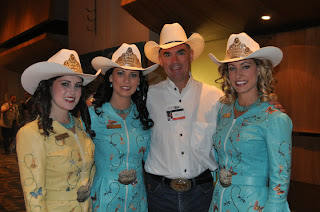 Ed Stelmach disappoints every year at the Stampede. In 2007, he had us all smacking our heads on the ground when he called it “the Alberta Stampede“. The last two years, he has celebrated the Alberta Stampede by wearing a suit jacket over top of his cowboy duds. A major no-no.

And this year, it’s more of the same. On the weekend, he went with a rather unflattering vest that Ed’s mom appears to have sewn his name into, and on Tuesday he dusted off the suit for the third straight year. 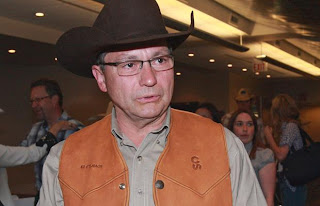 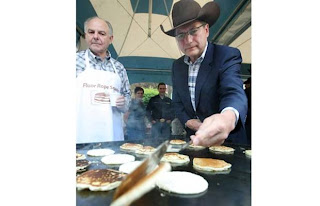 But despite my criticism of Stelmach, I’m going to give his Finance Minister the title of “Worst Dressed” this year. I’m hesitant to do this based on a profile picture, but I can’t imagine anything going on below the shoulders that could salvage this outfit. 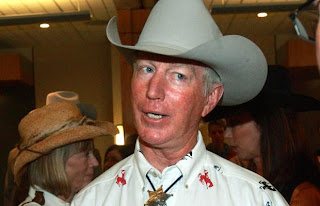 Which brings us to David Swann who is an academic from the big city and doesn’t pretend to be anything else. In fact, he rode his bicycle in the Stampede parade this year.

But you know what? Even though Swann looks completely out of place every year, he puts on the hat, the boots, and the belt buckle. He hosts one of the largest stampede breakfasts in Calgary. And he always looks like he’s having a great time. That’s something Albertans can respect. 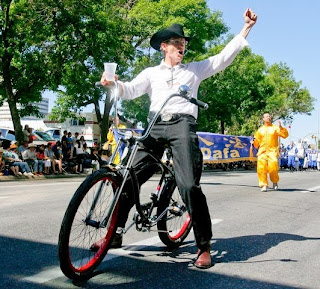 This is Dave Bronconnier’s last stampede as mayor and I’ll give the man props, he has always dressed, looked, and acted just like the Mayor of Calgary should during stampede. Hell, the man even rides a horse for crying out loud. 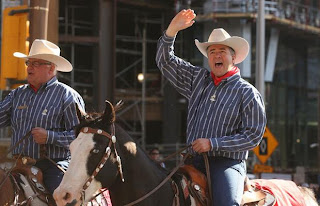