It was a busy weekend for Calgary Liberals with a swarm of candidates descending upon the city for Stampede photo ops. Saturday morning was the annual Liberal breakfast,

held this year at the Calgary Zoo. I was able to snap pictures of the seven candidates in attendance:

Gerard Kennedy likely won the cowboy competition of the Liberal leadership fashion pageant. He was the gutsiest when it came to “going western” and pulled it off the best (on both Saturday and Sunday). He seemed very relaxed when he spoke at the Liberal breakfast, keeping things light. (I have more GK pics posted on his OC)

Dion deserves full marks for effort. No one is going to ever confuse him for Clint Eastwood but, this being his fourth Stampede, he knows that you have to at least try (translation: the cowboy hat is a must). Stephane was proudly

telling anyone who would listen that “I look better than Stephen Harper in my cowboy costume“. I did notice that one of the buttons on his shirt was undone when we had a sit down interview on Sunday, so my hope is he wasn’t walking around all morning like that. Of interest, on the pamphlet table his campaign included free cabbage seeds which was…odd.

Ignatieff stayed away from the cowboy hat, going with blue shirts both on Saturday and Sunday. I’m not sure how well he could have pulled off a complete Stampede wardrobe so maybe that was a wise move. I was a little disappointed that he didn’t mention the carbon tax at all in his Saturday morning speech…

Carolyn Bennett looked a lot better on Sunday than Saturday. The Sheriff badge on Saturday made her look more like an 8 year old at Halloween than a serious politician. But she bounced back well on Sunday and was probably the best dressed of the Liberals at the Hays breakfast.

Dryden got the biggest laugh of the morning when he talked about how he’s always worried about fitting into his jeans. Strange thing is, his outfit actually looked slimming. Like Iggy and Brison, he went with the jeans and open button shirt, avoiding the hat.

points by talking about going to Cowboys when in Calgary. That might explain why he didn’t feel quite up to dressing up for Sunday. His jeans and golf shirt was probably the least “Stampedy” outfit of any of the politicians at the Hays breakfast.

Hedy Fry showed up late on Saturday and, along with Dryden, was a no-show on Sunday. Her speech was pretty much “I’m a Western Liberal. You’re Western Liberals. You should vote for me.” I found it quite odd that a Vancouver MP would say “I welcome the other candidates to Calgary and the Stampede”.

As always, every single candidate sucked up to the crowd with various variations on “Calgary Liberals are the best Liberals” and “we need to elect more Liberals in Alberta”. You can read Naylor’s Take on the Stampede Breakfast here.

Sunday was the Hays breakfast and Paul Wells has a good fashion review on his site. Among the highlights of his spy’s report:

Someone is dressing the Prime Minister. […] About a zillion times better than last year’s bizarre too-tight S&M gear.

Jim Prentice wore the same damn buckskin jacket he always wears, Stampede or not, but given his portfolio, it makes sense.

As for the Liberal pretenders, Carolyn Bennett looked great and stylish in denim and suede.

Michael Ignatieff looked exactly as you would expect an academic who was told to dress western to look. […] No hat, though, which I’m told he claimed was because he has an 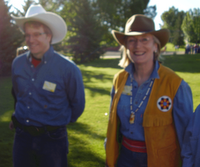 enormous head and did not want to make it more enormous.

Most shocking outfit was on Scott Brison. Normally, our Scott pulls off the downtown-hipster-late-cowboy thing well, but he didn’t even try today.

The winner by far of the fashion sweepstakes was Gerard Kennedy. You can tell when someone is really a westerner, and this guy is to the ranch born.

Since I’d talked to the Liberal contenders the day before, my two main targets for the morning were Jim Dinning and Steve Harper. Unfortunately, I missed Harper completely. It sounds like he jumped out of his limo, did some media and left fairly quickly (with so many human beings around, Steve was no doubt uncomfortable).

I did manage to track down Jim Dinning. I went up to him and said “Hello Mr. Dinning, could I have my picture taken with the next Premier of Alberta“. Jim laughed and we had our picture taken. However, as soon as the click went, he turned and walked over to a nearby business exec without saying a word to me. Considering I could very well have been a potential supporter, that rubbed me a bit the wrong way; last year, Jim Prentice was willing to chat even after he knew I was a Liberal. On the fashion front, Jim wore a white top with his own name on it.

So, all in all, a fun weekend. I interviewed Stephane Dion after the Hays breakfast and will have a recap of that later this week. 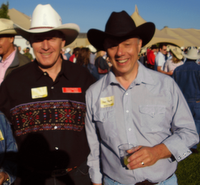