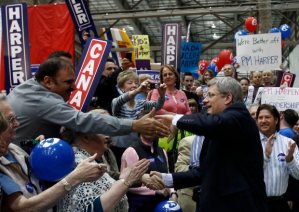 One year ago today, Stephen Harper turned an “unwanted election” into his first majority government, Jack Layton and the NDP soared to never before seen heights, and Liberals spent the evening curled up in a fetal position sobbing in the corner.

On political anniversaries, it’s tempting to give each party a thumbs up or thumbs down, but the past year has been less clear cut, as the major parties try to figure out where they fit in Canada’s new political dynamic.

It feels like a “Harper majority” was hyped longer than the Phantom Menace – and the end result was just as much of a letdown. After years of being told by both the right and left that a Harper majority would mean an unrecognizable country, it turns out a Harper majority looks a lot like a Harper minority. I hardly think when people warned of his “hidden agenda”, abolishing the penny is what they had in mind.

So if the past year has proven anything, it’s that Stephen Harper has always been and always will be an incrementalist. He has made some changes – goodbye gun registry, so long Katimavik…CBC and Statscan, you can stay, but we’ll make your job a bit harder, in the hope the public begins to question your value. These are bigger changes than he made during the minority years, but the man isn’t reshaping Canada as we know it.

While none of those moves prompted a large backlash, there are storm clouds on the horizon. The F-35 fiasco could tarnish his reputation as a strong financial manager. A stagnant economy would speak directly against the ballot question he was elected on. Robocon could blow up in his face. Bev Oda is still in Cabinet, so that alone guarantees us a few hilarious screw ups.

Outlook: Harper survived year one of the majority unscathed, but he survived with Nicole Turmel as leader of the opposition. The next year will be harder than the last.

The past 13 months have been the most turbulent in this “new” party’s long history, filled with highs, lows…and voting delays.

Jack Layton’s death was tragic, but life has gone on for the Dippers. Their leadership race may not have generated the excitement they hoped it would, but they came out of it with the only leader who has a realistic shot at ever living at 24 Sussex, so that’s a point in their column.

With the exception of a few easily forgotten floor crossings, their rookie caucus hasn’t been the embarrassment we thought it would be, so that’s another point for the boys in orange.

Outlook: Mulcair is in the midst of his leadership honeymoon, but he’s been treated to the kid gloves by the Conservatives so far. That’s going to change if Harper ever decides Mulcair is a legitimate threat.

On March 31st, Justin Trudeau knocked out Tory Senator Patrick Brazeau. There haven’t been many highlights over the other 365 days since election night.

That’s not to say Liberal rebuilding hasn’t gone on behind the scenes. The party picked a new president with a lot of good ideas. Today, the Liberals became Canada’s most open party by letting supporters register to vote for the leader. Liberals finally get that the party needs fixing, and I’ve been surprised at the number of new faces I’ve seen at events over the past year – people who joined the party after May 2nd, because they wanted to save it.

In front of the scenes, Rae has performed well in the interim leader’s role, but the “will he or won’t he” saga around his leadership has been a distraction.

Outlook: The next year will be all about leadership, as the Liberals pick the man or woman who will either oversee the party’s death or its return to relevance. No pressure, though.

Can’t say I miss them.