Hanging up the shoes 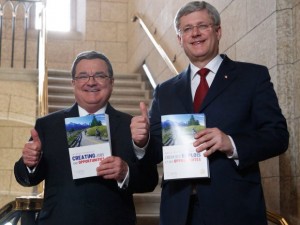 It’s not a huge surprise, but it’s still big news. After 8 years, the only Finance Minister Stephen Harper has ever known and loved is calling it quits:

OTTAWA – Jim Flaherty is leaving the federal cabinet after more than eight years as finance minister to prepare for a return to the private sector, saying the move is unrelated to his recent health problems.

Flaherty, who delivered his final budget last month, said he made the decision with his family earlier this year.

“As I begin another chapter in my life, I leave feeling fulfilled with what we have accomplished as a government and a country during one of the most challenging economic periods in our country’s history,” he said in a statement.

An official in the Prime Minister’s Office said Flaherty would be retaining — at least for now — his seat in the House of Commons, meaning he remains an MP for the time being.

Flaherty’s record is a mixed one, and I’m certainly on the more negative side of the partisan divide on this question. He cut the GST, but that helped send us into deficit. He brought in the stimulus, but only after being forced to at knife point. He claimed to end the era of inter-provincial bickering, but only by ignoring the bickering. He was a reliable minister, but regularly set off controversies.

However, any politician who can hold a post of that importance for as long as Flaherty did is clearly doing something right. He has been one of the few constants during the Harper era, and his departure will leave a gaping hole at the Cabinet table.

As is so often the case, speculation will turn immediately to Flaherty’s successor. Does Harper go with a trusted Mr. Fix It like John Baird, Jason Kenney, or Tony Clement? Does he go with someone with zero leadership aspirations, like Joe Oliver? Or someone with a bright future, like Lisa Raitt?

While Harper has done no real succession planning during his time as Prime Minister, he must certainly recognize the end is nigh. And taking over Finance on the brink of what is expected to be a wildly popular budget is about as good a resume padder as there is. While it likely won’t be his chief consideration in making this decision, if Harper turns to anyone with leadership aspirations tomorrow, he will be widely seen as not just choosing a new Finance Minister, but possibly a heir.

UPDATE: Joe Oliver it is!

One response to “Hanging up the shoes”