The Case For Kennedy 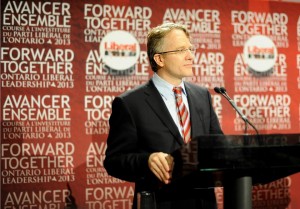 This weekend, Liberals from across Ontario will gather at Maple Leaf Gardens for what is likely to be one of the last grand old leadership conventions in Canada. Having 2,000 delegates decide who governs a province of 13 million doesn’t scream “grassroots”, but it makes for one heck of a show. There will be signs, there will be noise makers, there will be t-shirts, there will carefully orchestrated spontaneous outpourings of enthusiasm.

Rumours will fly, candidates will lead their delegates across the floor, and the TV cameras will scramble to find a heartbroken teenager in tears. Whether or not you have a horse in this race, if you like politics, Saturday is going to be Must See TV.

I’ll be attending the convention as a Gerard Kennedy delegate, and I suspect the grind of the campaign and lure of the hospitality suites will leave me with little time to blog. The OLP has been gracious enough to accredit bloggers, so expect Scott Tribe and others at Progressive Bloggers to be posting frequent updates as the voting progresses Saturday…and Sunday, if we see a repeat of 1996 when a leader wasn’t crowned until 4:30 am.

Up until that moment, delegates will be doing everything they can to persuade each other to vote for their candidate of choice. So for any delegates scanning blogs on their train ride into town, let me re-iterate why I’m supporting Gerard Kennedy and why I encourage you to.

What first drew me to Kennedy and keeps me coming back is that he is one of the most genuine politicians I have ever met and I’m 100% confident he’s in politics not for power, but for purpose. After growing up in small town Manitoba and going to University on a hockey scholarship, he became executive director of an Edmonton food bank at the age of 23, then of the Daily Bread Food Bank at the age of 26. Despite his aforementioned 4:30 am defeat to Dalton McGuinty, he stayed loyal, and as McGuinty’s Education Minister he got results – labour peace, smaller class sizes, higher test scores.

Of course, all the candidates in this race share Liberal values and they all have impressive resumes and a record of accomplishment in Cabinet. However, for me personally, there are two things that set Kennedy apart from the field.

The first is that Gerard is more genuinely committed to changing the way politics is done in this country than anyone I’ve ever met. He was talking about renewal long before it became an empty buzzword, and has released a comprehensive plan for change that will lead to a more open Liberal Party. (In fairness, many of the other candidates have released strong renewal platforms, especially Hoskins and Sousa).

Dalton McGuinty’s surprise resignation letter to Liberals 100 days ago was titled “Renewal”, because he recognized the party needs to change the way it operates to survive. Kennedy is not a member of the party establishment, and he offers real change.

And it is indeed because he is an agent of change that Gerard is well positioned to lead the Liberals to victory in the next election. Despite the happy-go-lucky feel-good mentality that has dominated this race, Liberal Party members need to recognize the situation we find ourselves in. The party has been in power for a decade, has alienated much of its base, and faces the very real prospect of a spring election. That’s an election we can win, but there’s also a very real risk we could tumble to third if the new leader isn’t able to connect with voters and show them the party has changed.

On that front, Kennedy has the advantage of being a known commodity from the Camelot period of the McGuinty government, who is trusted by voters. At the same time, he’s a fresh face who wasn’t at the Cabinet table when controversies around Bill 115, the Mississauga Power Plant, and E-Health exploded. It’s no surprise that every single poll released this campaign has shown he is the most electable candidate in the race – by a significant margin.

That’s the case I’ll be making this weekend. It’s a strong field of candidates, and I’ve heard very compelling pitches from each of their campaigns. When the confetti falls Saturday night (or Sunday morning), we’ll find out which case proves most compelling.

3 responses to “The Case For Kennedy”