Mulcair Takes on the West 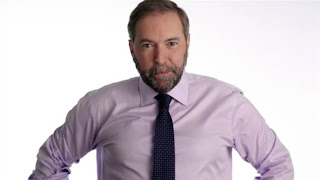 What started out as musings on the health of Ontario’s manufacturing sector has quickly escalated into a full fledged war of words between Tom Mulcair and the western Premiers. It’s an important shift in the dialogue, because going to war with the West is a lot different than going to war with the oilsands – after all, you won’t find many “save our oilsands” protests in front of Libby Davies’ Vancouver East constituency office.

Mulcair picking a fight with Premiers Clark, Redford, and Wall has led to his first patch of negative press since winning the NDP leadership – and rightly so. Calling Premiers who stick up for local industry “messengers of Stephen Harper” (in a tone that makes them sound like a swarm of Nazgul) brings him down to the level of Jim Flaherty, who routinely plays the role of Ontario’s leader of the opposition.

I think we can all agree Mulcair shouldn’t be disparaging the Premiers on this issue, but it’s less clear whether or not this is a shrewd tactical move, or another case of Mulcair not thinking before opening his mouth.

The first thing to consider is the popularity of the people Mulcair is attacking. We know Brad Wall is more popular than God and Alison Redford just pulled off a small miracle in Alberta. However, the third member of this trinity has seen better days and now trails the provincial NDP by 27 points – so it’s hard to fault Mulcair for alligning himself with the BC Dippers. Even in Saskatchewan, the fallout from attacking Wall might be minimal, as the provincial and federal NDP received similar shares of the popular vote during elections there last year. Just as there are many western voters who share Mulcair’s disdain for the oilsands, there are many western voters who nodded in agreement as Mulcair criticized their premiers.

In the broader picture, the trade-off between votes in the East and votes in the West might explain Mulcair’s gambit. To form government, the NDP will need to pick up at least 30-50 more seats next election. Of the 50 ridings the NDP came closest to winning in 2011, just 16 are in Western Canada – moreover, there are only four seats in Western Canada the party won by less than 10% last election, suggesting it will take more than a Twitter feud with Brad Wall to bring Mulcair down.

So there’s an argument to be made for concentrating on eastern voters, if you buy that the NDP’s road to 24 Sussex bypasses the West. If that’s the case, Mulcair’s salvo on the oilsands might not be the gaffe its being portrayed as, and it won’t be the last time he picks a fight with the western provinces.

Of course, Western Canada will be gaining new seats in 2015, and there’s the long game to think about. On that front, Mulcair would be well served learning from the party he hopes to replace. For years the Liberals won elections by scapegoating the West and, in particular, the oil industry. This electoral math equation usually paid off, but in the long run it has left Western Canada a charred dust-bowl for the Liberals, with nothing more than 4 specs of red west of Ontario left on the map.

Even if Mulcair can score a few extra seats in 2015 by playing the regions against each other, it’s not a strategy that is likely to pay off for the NDP in the long run.

4 responses to “Mulcair Takes on the West”