The Race for Third 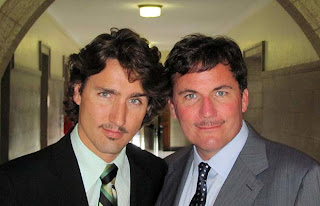 Back in February I asked readers of this blog who they thought would run for Liberal leader, and who they’d consider voting for. Admittedly, this is as far from a scientific poll as you’ll ever get, and I won’t pretend that the 500+ voters in this straw poll are all Liberals. But we’re not going to see anything resembling a credible Liberal leadership poll for close to a year, so let’s have a little fun with what we’ve got.

Before that, one other thing. It looks like a group of Borys Wrzesnewskyj supporters swarmed the poll late, so I’ve excluded Borys from my recap below. Mind you, the fact that he appears to be the only candidate with supporters dedicated enough to freep a web poll at this stage should likely tell you there are people out there who would like him to run. Which is more than can be said for a lot of the names I floated.

Rae is seen as the most likely to run and has the largest support base, which tells you all the talk about him being the frontrunner isn’t misplaced. My man from 2008, Dominic LeBlanc, is the only candidate within striking distance of Rae on the support poll, though 11 other names earned between 11% and 19% so there are plenty of viable candidates out there.

I’ve plotted the 16 candidates who scored at least 10% on either poll below. You can see that Trudeau, Carney, Dalton, Nenshi, Goodale, and Lang all have more people who like them than than expect them to run, leaving them as the most probable candidates for a genuine “Draft” movement.

The reverse is true for the other McGuinty, Cauchon, Garneau, and Coderre but, in fairness, I suspect that Quebecers are seriously under represented on this poll. 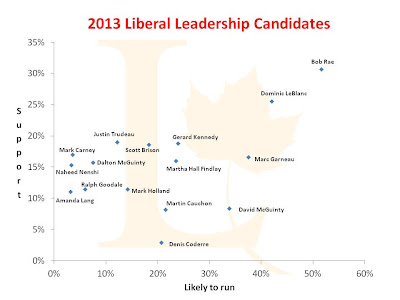 None of this means a heck of a lot when we don’t even have the rules yet. But it shows there’s nothing even remotely resembling a consensus on who will be running, never mind who will win.

Tomorrow, I’ll speculate a bit about who might be running, so if you’re hearing any rumours, by all means float names my way.