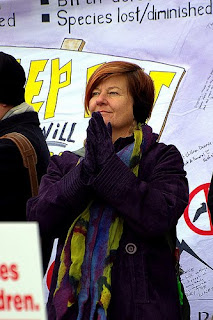 Background: Like Hugh MacDonald, Blakeman has sat as a Liberal MLA since 1997, holding an impressive collection of portfolios. She has been a strong critic of the Tories, gaining prominence in 2004 when she asked Ralph Klein to provide travel receipts from recent trips and Ralph went off the rails, asking her over a dozen times if she was calling him a liar.

The former actress is still quite involved with arts and culture groups in Edmonton, and is married to city councillor Ben Henderson. She has been a strong proponent of encouraging women to get involved in politics.

Video: Clips from my interview with Laurie in May.

Online: Blakeman has gone as purple as can be on her website, trying to capitalize on Nenshi-mania. Although she only signed up for Twitter at the start of the contest (like most of the candidates), Blakeman has made an effort to engage Albertans online in the past, with a fairly active Facebook account and over 400 videos on her constituency YouTube channel. 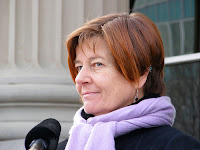 Can she win? Blakeman has been around long enough to have a following inside the party, and she has no doubt been able to sign up a large number supporters from left-leaning organizations. However, I get the sense her support is concentrated in downtown Edmonton – the new rules giving ridings a maximum of 500 points in leadership contests will hurt her more than anyone else.

My Take: I do like Laurie – she’s a great MLA, and she fights passionately for issues that myself, and all Liberals, care deeply about. She is experienced, having served as Deputy Leader under both Kevin Taft and David Swann, and is the most polished candidate in this field. 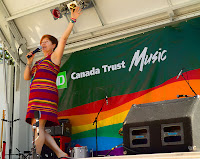 All that said, I probably wouldn’t rank her above 3rd or 4th on my ballot if I were voting. Blakeman is just seen as too left-wing to appeal to voters outside Edmonton and the biggest opportunity for the Liberals right now is on their right, not their left.

For more on Laurie, you can read her answers to CalgaryLiberal’s candidate questionnaire here.