ALP Leadership Candidate Profiles: Hugh Can Do It 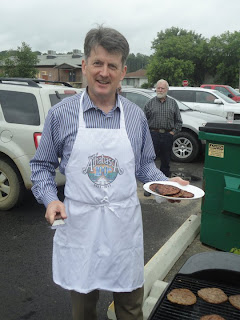 Background: First elected in 1997, Hugh has been the Alberta Liberal Party’s Ted Kennedy in recent years – unabashedly Liberal and unafraid to speak out. As Hugh’s bio points out, he has a perfect legislature attendance record during this time period, something Jack Layton would no doubt be proud of.

Prior to entering politics, MacDonald worked in the oil and gas industry.

Video: My interview with Hugh from May.

Can he win? Early on I discounted MacDonald as a 4th or 5th place finisher in this contest, feeling he didn’t have the organization in place to sign up many new members. But people I’ve talked to have been impressed with his campaign, and I’d guess his supporters, the staunchest of Liberals, will be the most likely to vote. 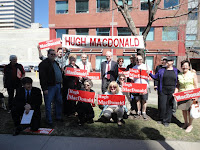 He has establishment support from the likes of Nick Taylor, Ken Nicol, and Debby Carlson, and his fiercely Liberal reputation may appeal to members who are worried about an outsider coming in. I doubt he’ll win, but I wouldn’t be shocked to see him as high as second.

My Take: I’ve never really visualized MacDonald as a future ALP leader. I’ve always found him a bit too “scandal-obsessed” and he has a tendency to go off on weird tangents – at May’s leadership forum, he made putting the constituency name on party membership forms his flagship leadership plank. Maybe it’s a good idea, but it’s not exactly “Yes We Can” stuff.

That said, the more I think about it, the more I like the idea of MacDonald as the leader. He is, hands down, the best speaker in this field, and a bushy haired Maritimer from the oil industry would help break the party’s “university professor” imagine. MacDonald would fire up party loyalists, and his soundbyte attack dog style could help the ALP earn back some of the headlines they’ve lost to the Wildrose.