ALP Leadership Candidate Profiles: The Doctor is in

The Alberta Liberals will be selecting a new leader on September 10th, from among 5 candidates: Laurie Blakeman, Hugh MacDonald, Raj Sherman, Bruce Payne, and Bill Harvey. To vote, simply register here as an ALP supporter by August 19th.

Today, the second part of a series profiling the candidates (previously – Bruce Payne). 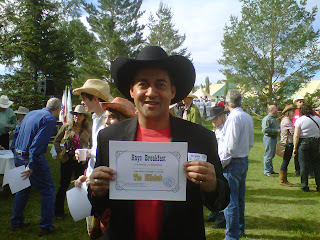 Background: Sherman moved to Canada from India at a young age, and has lived in Edmonton since the 1980s, attending the U of A and then staying to practice as an emergency room doctor. According to his rateMDs reviews, he was a pretty good one (one review states “McDreamy is an understatement“). Sherman took the plunge into elected politics in 2008, riding the Stelmach wave across Edmonton and taking back Edmonton-Meadowlark for the PCs.

So how did the good doctor go from PC backbencher to ALP leadership frontrunner in under a year? Well, it all comes down to his very own Kai Nagata moment last November, when he fired off a late night e-mail to his entire address book slamming the Stelmach government’s Health Care record. Suffice to say, that was it for Raj in the PCs, and his move to the Liberals was a natural fit.

Video: I didn’t have a chance to video interview Raj during May’s ALP convention, but I include a mash-up of Sherman clips from the all-candidates debate conducted that weekend:

Can he win? I’d peg Raj as the front runner. Despite being a newcomer to the ALP, he has federal Liberal connections and has signed up a slew of new supporters. The big question for Sherman is how successful he’ll be outside of Edmonton and how he’ll place on the preferential ballot – after all, with 5 strong candidates, it’s unlikely this one will be decided on the first ballot.

My Take: I worked with Raj on the Gerard Kennedy campaign in 2006, and he’s certainly a likable chap. However, as his departure from PC caucus and subsequent claims of corruption, bribery, and cover-ups in the Health Care system show, Sherman is a loose cannon, prone to firing off in any direction if he gets worked up about an issue. 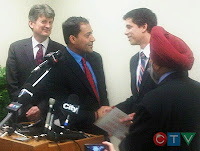 That, coupled with his lack of political experience, makes him a huge risk. At the same time, there’s something to do said for the ALP taking a risk and going with the wild card. Sherman would bring a jolt of energy to a moribund party, and has credibility on the province’s number one issue. Although some feel his Health Care focus makes him too one-dimensional, I honestly think Sherman should try to make it a single issue campaign about Health Care if he wins.

The Liberals have been out of power and largely irrelevant for close to a century, so there’s something to be said for taking a chance and going all in on the doctor.