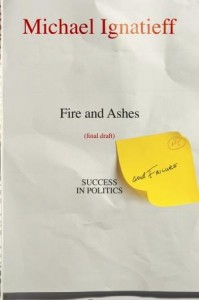 “I had made myself into a politician, and I didn’t much like what I was becoming.”

On my Christmas reading list this year was Michael Ignatieff’s latest book, Fire and Ashes, which takes the reader from the moment “the men in black” recruited him to come back to Canada, to his historic defeat on May 2, 2011. So for Michael Ignatieff buffs curious about his adventures overseas or how often Bob Rae did the dishes when they were roommates, you’re out of luck. What the book does offer is a tidy summary of “the Michael Ignatieff experiment“, from the perspective of the test subject.

Because, after reading the book, you really get the sense that’s what Michael Ignatieff’s time in politics was – a large scale ill-fated experiment. Ignatieff admits he was taken aback when three politicos from Canada visited him at Harvard in 2004 and asked him if he’d like to be Prime Minister, calling it “an astonishing proposition”.

As Ignatieff grapples with the decision, we get the first bit of foreshadowing that there’s there’s going to be a lot more about failure than success in this book. While Ignatieff says he admired the way Trudeau (the elder) “knew exactly why he was going into politics and who he was doing it for”, not once does Ignatieff consider what he’d hope to accomplish as Prime Minister. Indeed, the first hint there are even issues Ignatieff cares about doesn’t come until page 64, when he discovers the challenges of life in rural Canada.

Once he decides he wants to be Prime Minister, Ignatieff goes at it full throttle, pushing aside doubts about his own abilities. When beginning his leadership bid in 2006, barely a few weeks into his political career, Ignatieff says he “felt like a trainee skier starting a descent at the top of a black diamond run”. While it’s refreshing to see a politician admit their worries and fears, it says a lot about Ignatieff that he felt he could teach himself how to ski on the way down the hill.

So the book is largely about him learning to slalom at 50 miles an hour. Early on, Michael discovers that quotes can be taken out of context. Then he learns that national unity is kind of a big deal, and that terms like “war crimes” shouldn’t be tossed around cavalierly. In the 2008 election, he learns that voters don’t like new taxes. A year later, he learns that minority governments lead to “permanent campaigns”. His entire political career comes across as a journey of self-discovery, largely explaining why the man never looked completely comfortable doing what he was doing.

It’s not exactly a bombshell revelation that Michael Ignatieff was in over his head, but what I found most interesting about the book was seeing how Ignatieff responded by essentially trying to become a generic cardboard cut-out politician. Consider this excerpt, where he talks about what he “learned” during the 2006 leadership race:

“I had to unlearn being clever, being rhetorical, being fluent, and start appreciating how much depends on making a connection, any connection, with the people listening to you.”

Though I’ve never been a fan, I’ve always felt Michael Ignatieff oozed of potential. He’s intelligent, thoughtful, and, when he’s not spewing out talking points he doesn’t believe in, quite likable. Even charming. However, rather than playing to his strengths as the anti-politician, he set out to turn himself into Bob Rae – without realizing it took Bob Rae god-given talents and a lifetime to hone them, before he become Bob Rae.

I don’t know if the Michael Ignatieff experiment was ever going to be successful, but it wasn’t going to work by turning Ignatieff into a conventional politician.

A copy of this book was provided by Random House for review.