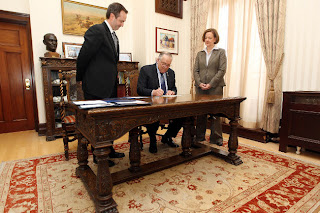 We were treated to a pair of Alberta election polls last night – both showing the PCs and Wildrose in a statistical tie. Given previous 2012 polls have shown Redford between 5 and 37 points ahead, this comes as a bit of a shock – though it’s not necessarily bad news for the PC campaign team, as it helps them frame the election as a two party race, and may prompt the media and voters to take a closer look at Smith’s platform and team.

I talked about Redford targeting female voters yesterday and these numbers bear that out – the PCs lead by 12 among women, but trail by 8 among men. The Wildrosers hold a 7-8 point lead in Calgary, with the two parties tied in rural Alberta. The PCs still lead in Redmonton but, most surprisingly, the Wildrose Party has jumped to second place. I haven’t seen much media commentary on that point, but that’s really a shocking development that plunges Edmonton into an unpredictable vortex of 3 and 4-way races.

Speaking of unpredictability, who would have thought day 1 of the campaign would feature an attack against the far right wing Wildrose Party for being soft on prostitution? Yet, that’s exactly what happened, when the PCs circulated a Danielle Smith column from 2003, in which she writes about the health, crime, and safety benefits a Calgary red light district would bring with it:

Even worse, one gets the impression that prostitutes are deemed unworthy of the same basic rights to protection the rest of us enjoy.

When a prostitute is raped, beaten or even murdered, her assailant is seldom brought to justice. The book Serial Killers from A-Z contains a section on unsolved multiple murders, a shocking number of which are prostitute slayings. A 2001 study of prostitutes on Vancouver’s East Side, conducted by the Prostitution Alternatives Counselling Education Society, found that police misconduct and violence towards prostitutes is also rampant — allegations include sexual and physical assaults, theft, threats and attempted murder.

Moreover, when a customer refuses to pay for the services he’s received, a prostitute has no recourse to collect on the debt. If she works for a pimp, she has no ability to negotiate wages, benefits, hours of work or working conditions, or even leave the profession. There is no access to treatment for those addicted to drugs. A john has no idea when he picks up a “date” whether she is infected with a venereal disease or HIV.

The moral crusade against prostitution has had devastating unintended consequences. It’s no surprise sex-trade workers are the most vocal advocates for decriminalization. If the status quo is this bad, legalization can’t be worse. Many nations agree.

Redford attacked Smith for taking an “uncaring” and “simplistic” approach to the issue, but when you read the full article, it’s clear Smith’s position is anything but. She studied the issue, considered the health and safety of the individuals involved, and came to a perfectly reasonable conclusion – albeit a politically toxic one.

This won’t be the last time an old article of Smith’s is going to surface – especially if her poll numbers hold. As Michael Ignatieff learned last spring, thoughtful writings get distilled down to damaging soundbites during political campaigns.

The difference, I think, is that Smith appears to be a far more talented politician than Ignatieff, so she’ll stand a better chance at fending off these attacks.