On Sunday, long shot Liberal leadership candidate David Merner sat down for brunch with a few Toronto area bloggers, for an informal chat about the future of the Liberal Party. Merner is best known as one of the “unknown” leadership aspirants, so if you’re looking to better know him, I’ve summarized the highlights of our conversation below.

Merner has been labelled as the “merger candidate” by some, but he quickly dismissed that, preferring the term “co-operation candidate”. He readily acknowledges that Stephen Harper and Thomas Mulcair don’t play well with others, so any co-operation will likely be limited to the Greens at first (unless the Rhinos are looking to play ball). He’s open to the idea of “non-compete” agreements or joint nominations, but only if they’re agreed to by the local ridings.

Personally, I get the argument for these type of deals when the math makes sense, but my worry is we’ll see them primarily cut in unwinable ridings. You’ll never rebuild dormant ridings by giving up on them, and if you don’t give voters the option of voting Liberal, they might not come back when you do run a candidate. It would be akin to a professional sports league shutting down for a season and assuming casual fans won’t move on. And we all know that would never happen.

One question I plan to ask every leadership candidate is how they see the “winning Liberal coalition” forming. Are we going after Ontario, soccer moms, high income Dippers, Cougar Town fans?

Merner sees the greatest opportunity for the party in Quebec. He concedes an Albertan-turned-BCer might not be the intuitive choice to win back La Belle Province, but he gave us his pitch about being able to relate to Quebecers because there are both literal and figurative mountains between BC and Ottawa. More importantly, he gave that pitch in pretty good french.

On the flip side, he also sees Western Canada as an area for growth, and feels having a Western leader would help there. He even mused about running in Edmonton.

Merner is all for pot legalization, favours cutting payroll taxes, and plans to make the environment a central campaign issue. He favours putting a price on carbon but doesn’t like the bureaucracy of cap-and-trade, so…I’m guessing that means a carbon tax, albeit one branded using a slightly less toxic name.

Of course, as we were reminded this week, the Conservatives will call anything a carbon tax, so maybe the best approach is to just be upfront about it. Tell people that you’re taxing polluters and every cent raised will be used to cut payroll taxes – then let the voters decide.

He plans to run hard against it.

Despite the aforementioned policy talk, Merner’s key campaign message is that the Liberal Party needs to embrace microtargeting if we ever want to form government.

Agreed. I’m not sure I’d make it the central pillar of my leadership campaign, but we’re in agreement. 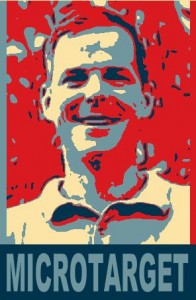 On the whole, I like David Merner a lot. He isn’t delusion and recognizes he’s a “dark horse”. He has a good understanding of politics, speaks frankly, and recognizes the dire situation the Liberal Party finds itself in.

In many respects, he comes across sounding more like a candidate for Chief of Staff to the Leader than a candidate for leader, but it’s not like he’s devoid of substance or vision. He has a good sense of what the party’s core value proposition should be (“Liberté, égalité, fraternité“) and has the makings of a solid platform framework. We’ll have to see how he comes across at rallies, on TV, and in debates, but he spoke with conviction and communicated his message well in our small, informal brunch setting.

No, he won’t win, but Merner is compelling enough that he should have no problem mobilizing many of the same “co-operation” groups who came out for Nathan Cullen during the NDP leadership race. If you’re looking to place a bet on which of the “unknown” candidates will perform best, then Merner is likely the frontrunner at this stage.

Leave a Reply to Brian from Toronto Cancel reply