January: SunTV applies for corporate welfare, arguing that they cannot survive unless the government forces people to watch them.

Later this year, they would give Rob and Doug Ford their own show…before cancelling it faster than Lucky 7.


February: Patrick Brazeau is knocked out of the Tory caucus. While the Senate has yet to change rules around travel expenses, they were quick to pass a “no pictures of senators in thongs” bill.

March: In what was really the only victory for Toronto’s Mayor this year, he rallies council together…to get a burger joint built near City Hall.

Building on the success of “Not a leader” and “Just Visiting“, the Tories set out to define Justin as…too sexy?

May: The Liberals retrieve Labrador, winning Peter Penashue’s old riding by 16 points. Always the optimists, the Tory war room sends out a press release claiming this shows Justin Trudeau is “in over his head”. 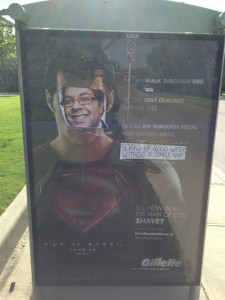 June: When Calgary is hit with a once-in-a-century flood, Mayor Nenshi earns praise for his leadership, that includes 43 consecutive hours without sleep. Not to be outdone, when Toronto is hit with a flash flood a few weeks later, Rob Ford vows to go 43 hours without crack.

July: Stephen Harper shuffles his Cabinet, promoting his most talented MPs, and Pierre Poilievre. Poilievre winds up in charge of democratic reform, a clever move to show that Stephen Harper actually does have a sense of humour.

August: The PQ announces plans for a controversial “Values Charter”. Justin Trudeau immediately denounces it, while Tom Mulcair announces he will wait and see if it’s “very intolerant” or “extremely intolerant” before deciding where the NDP stands. 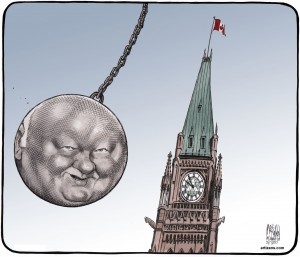 September: The Senate sandal explodes, with accusations that members of Stephen Harper’s staff conspired to repay Mike Duffy’s expenses. The good news for Harper is that it’s perfectly plausible he was in the dark, given his reputation as a “hands off” type of leader.

In a coincidence, Stephen Harper’s hockey book is also released this month. In it, Harper describes how Wilfrid Laurier’s “tax on everything” nearly killed the infant NHL. 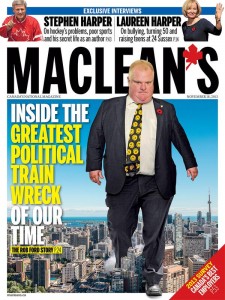 November: Toronto’s desire to be the centre of the universe is actualized, as the city dominates the international news and US talk shows. Toronto parents are forced to explain to their children what “crack” is. Me? I have to explain to my cat that, no, the Mayor of Toronto is not coming to eat him.

Quick. What’s a 9-letter word for obsessive preoccupation with ones self? 8th letter is “a”.

(answer: We will accept either “BrianJean” or “Egomaniac”)