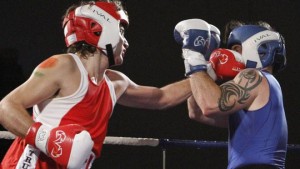 Sen. Patrick Brazeau tweets vow to fight charges against him

Sen. Patrick Brazeau did not attend a brief hearing Friday over charges of assault and sexual assault against him, and maintained his innocence in a passionate tweet.

The 38-year-old’s lawyers claimed they had not received full disclosure of evidence against their client, forcing the hearing to be pushed to June.

Brazeau has pleaded not guilty to the charges, and on Friday afternoon made his first direct public comment on the allegations, tweeting, “I will fight these charges against me to prove my innocence. I shall return!”

If history is any indication, the smart money is on the charges knocking Brazeau out in the third round. (pause) OK, sometimes they’re just too easy.

But on a semi-serious note, we’re now coming up on the one-year anniversary of the much hyped fight between “Senator Soldier” and “the Shiny Pony”. I remember rolling my eyes at the metaphor overdrive that followed Trudeau’s upset victory – how it was a brilliant political calculation, how this showed his true grit. I know in politics a dropped football can become more than a dropped football, but the whole thing seemed too gimmicky to assign a greater meaning to it.

A year later, it’s impossible to look back and not be somewhat taken aback at just how dramatically the respective career paths of the two combatants have diverged. I didn’t think it was possible for one man to embroil himself in as many controversies in so short a time frame as Brazeau has – there was the sexist slur on Twitter, his abysmal attendance record, the residence audit, the Teresa Spence taunting, and finally domestic violence charges that saw him booted from the Tory Caucus. I know he wasn’t exactly a rising political star before the fight, but to see him pummeled to the mat time and time again over the past year has been shocking.

In the other corner, Justin Trudeau was already a rising star, but in March 2012 no one expected him to run for LPC leader and, if you floated his name as a candidate, many would have dismissed him outright. For all the talk we hear these days of his “inevitability”, you could have found more than a few Liberals willing to place money against Justin a year ago.

In the alternate Fringe universe where Patrick Brazeau knocks out Justin Trudeau, prompting squeals of delight from Ezra Levant, Brazeau probably still disgraces himself and Trudeau probably still becomes the next Liberal leader.

But the entire story certainly makes you wonder about how political metaphors can come alive and take on a life of their own.