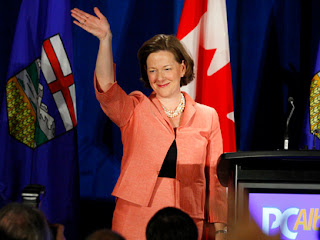 How certain was I that Alison Redford would be dealt a humiliating blow last night? I had my “morning after” post time stamped to go up at 8 am, detailing Smith’s victory using a colourfull “Wildrose chinook of change” analogy.

It turns out that politics, like the weather, can be unpredictable.

Not that a PC win in Alberta should ever be considered unpredictable. As I mused in my National Post Full Comment article this morning, dynasties do not crumble overnight. The decline of Rome lasted hundreds of years. The Oilers won a cup after dealing Gretzky. The Empire was good for two more movies, even after the Death Star blew up.

And last night, the PC empire struck back in full force:

Yes, the PCs who were down by 7-10 points in every poll days before the vote pulled out a crushing 10-point victory.

The comparison I would draw is to the 2004 federal election, when the dying Liberal dynasty succeeded in scaring voters into giving them one last chance. With that in mind, here’s my cautionary warning to PC supporters who might have dreams of another 40 years in power:

The situation in this election is eerily similar to the 2004 federal campaign, when 2012 Wildrose campaign manager Tom Flanagan — then working for the federal Conservatives – tried to lead an upstart right wing band of misfits to victory against the natural governing party. In both instances, the incumbent dynasties had knifed successful leaders, and had unrealistic expectations for their new leaders. Just as anonymous PC strategists lamented about winning “too many seats” in February, in 2004 Liberal strategists mused about 200 seats for Paul Martin (which in fairness, Martin got – it just took him two elections to do it).

In both instances, the incumbent badly mismanaged a scandal (Adscam for Paul, the “no meet committee” for Redford), and threw caution to the wind by calling an election in the midst of it. In both instances, Flanagan’s great right hope rose in the polls, pulled into the lead, won the debate…and then blew it in the bottom of the 9th. Both times voters stared change in the face, and decided they weren’t ready for it – yet.

We all know how things turned out federally, and therein lies the cautionary tale for all the players in Alberta. The Wildrose Party now has a base of 35% of the Alberta electorate. They have an impressive, albeit inexperienced, leader in Danielle Smith who now has four years to refine her skills and weed out the thornier candidates from her party’s ranks. If Stephen Harper could make the federal Conservatives look “non-scary”, then surely the photogenic and charismatic Smith can pull off the same trick in Alberta.

The challenge facing the PCs is now the same one that faced Martin in 2004 – they won on a campaign of fear, and won thanks to borrowed votes from the left. It was a brilliant play for which Alberta’s political mastermind Stephen Carter deserves full credit, but it leaves the PCs governing on a shaky foundation. Given the Alberta Liberal Party has received between 25% to 30% of the vote in every election since their near-victory in 1993, some quick napkin math suggests that as much as one-third of the PC vote this campaign came from former Liberal supporters. These voters were willing to look past the decades of the PCs doing everything in government they accused the Wildrose of wanting to do, but they are unlikely to be forgiving if Redford veers to the right again. To keep these voters in the PC tent will require competent, centrist government from Redford — but also a still-scary Wildrose Party come 2016, and the lack of a credible alternative on the left.

I wouldn’t discount that possibility, but holding borrowed votes on the left and preventing further bleeding to the right is a difficult balancing act for any government. While Redford was the big winner Monday, when the book is eventually written on the PC empire, its latest victory could still prove to be the beginning of the end.