EDMONTON – Alberta’s Progressive Conservatives appear to be actively painting their Wildrose opposition as the party of old, white males.

Tory strategists in recent days have begun warning voters that the Wildrose roster of candidates is dominated by Caucasian males and that if the Wildrose wins power it will sanction policies that cater to them.

For those keeping score at home, Alison Redford’s Cabinet is 86% male and 95% white. Her two female Cabinet Ministers have been entrusted with the portfolios of Environment and Culture, while her single visible minority runs Service Alberta.

I don’t know which party is older, but just three of Redford’s Cabinet Ministers were born since the PCs took power 41 years ago. 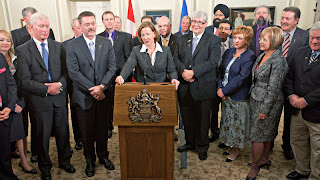 This is yet another example of how awkward the entire PC campaign has become, as they try to swat at the Wildrose Party from the left.

Take the two words the PCs are trying to make the defining issue of the campaign: conscience rights. For the past week, the PCs have made it a point to imply the Wildrose stand on conscience rights would threaten everything from same sex marriage to women being able to get prescriptions for birth control pills.

However, Redford’s very own Minister of Energy Ted Morton put forward a conscience rights bill in 2006, nearly identical to what Danielle Smith is proposing today. It was only defeated because of a Liberal-NDP filibuster, and Morton claimed 75% of the PC caucus supported his position.

All of this underscores how incredibly uncomfortable Redford’s attacks on Danielle Smith must be for many members of her old white male caucus – and many long time PC voters. Although Redford will continue to paint the Wildrose Party as a right wing Frankenstein, the truth remains that the monster was created in the PC’s image.