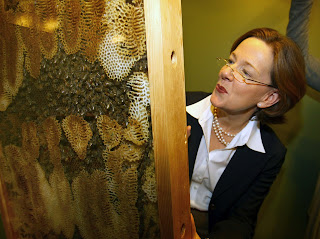 One week into the election, and Alberta’s 40 year PC dynasty is on the ropes. It’s premature to write the obituaries, but it’s never too early to write about what went wrong – and what went wrong in week one was a complete inability of Alison Redford to control the agenda.

One day, the Tories are under attack for burrying a health care report card. The next, they’re fending off the first Twitter controversy of the campaign. And nearly every day has featured unwanted attention on the “money for nothing” committee.

Redford tried to diffuse the issue Friday by forcing MLAs to return all the pay they received, but this gesture came nearly a full month after the story broke…and several weeks after Redford accused opposition MLAs who returned the pay of “grandstanding”.

It’s fairly obvious Redford could have killed this story by coming directly to this end point when the story broke. Hell, given it took Wildrose MLAs a week to return the cash, she might have even been able to turn the tables, and pointed to her decisiveness as a sign there was a new sheriff in town, ready to do politics differently. Instead, the issue festered in the weeks leading up to the writ drop, and continues to distract.

If you think Redford’s latest move will put the scandal to bed, don’t count on it – friendly fire comments, Wildrose commercials, and the Leader’s Debate will see to that. As a friend of mine said over the weekend, all Danielle Smith has to say in the debate is “Alison, it shouldn’t take bad polling numbers to make you do the right thing“.

It’s been one bad news story after another for the PCs on the campaign trail. As Alberta’s hockey teams have learned, it’s hard to score goals when you’re always playing in your own end.