My 5 cents on the federal budget 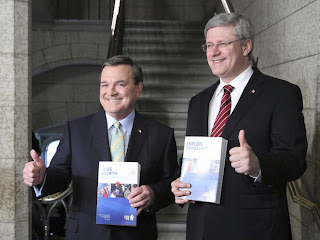 For years the Liberals warned you of Stephen Harper’s hidden agenda. Just wait until he gets a majority, and you won’t recognize Canada.

For years, Conservatives quietly whispered to their base that they couldn’t go as far as they wanted because of that damn minority government. The Liberals won’t let us, the Senate won’t let us!

So after waiting for nearly a decade, we finally got to see the long anticipated Harper majority budget. And what was the flagship change he needed a majority to bring in?

The elimination of the penny.

OK, so it wasn’t exactly the “transformational” budget we’d long feared or hoped for, depending on our allegiances. But it does provide a good look at what kind of Prime Minister Stephen Harper truly wants to be.

This budget should tell us once and for all, that he’s not a guy who wants to fundamentally change Canada. Sure, he’s tossed a few symbolic gestures to the base, in the form of CBC budget cuts, the death of Katimavik, and a warning to environmental activists. But Harper remains the head of the biggest spending government in Canadian history, even after accounting for population growth and inflation.

The budget also shows us he’s not hunting for a legacy, quite yet. There are some “big picture” reforms in this budget, but they’re mostly fine tuning – a speedier immigration process, changes to the innovation agenda, pension reform. These are all worthy initiatives if they work, but they likely won’t ever find their way into history textbooks. They’re also the sort of things a Liberal government would do.

So, there you have the real Stephen Harper. A largely low key and pragmatic Prime Minister willing to toss symbolic gestures to his conservative base. A man whose greatest legacy at this point is the elimination of the penny.

Budgets, Federal Politics
You are not authorized to see this part
Please, insert a valid App ID, otherwise your plugin won’t work correctly.