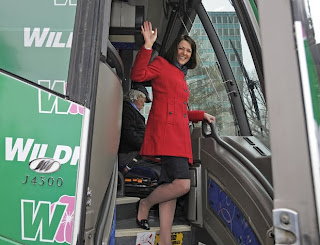 If you’ve been reading my Alberta political posts over the past few years, you’ve probably deduced that I’m a fan of Danielle Smith. Not in the sense that I’d vote for her (especially with socially regressive positions like this), but Smith is an impressive politician – smart, articulate, charismatic, thoughtful.

From that perspective, this is probably the least impressive Smith has been in the past two years:

Premier Alison Redford must not like Alberta because she says she wants to change it, Wildrose Leader Danielle Smith told reporters near the Alberta Legislature Wednesday.

In a photo opportunity in front of a provincial building being renovated for MLA offices, Smith attacked the Conservative government’s priorities and wasteful spending, but she saved most of her venom for her main rival in the provincial election campaign.

With numerous polls showing the two parties neck and neck, Smith lashed out at Redford for saying in a speech to the Calgary Chamber that the province needed change.

It shouldn’t be too hard to figure out where this attack came from. The Wildrose campaign manager is none other than Tom Flanagan, and Paul Martin loved using the “Stephen Harper hates Canada” line against Stephen Harper back when Dr. Tom was managing the federal Tory campaigns.

I always cringed when Martin uttered that line – it’s juvenile, baseless, and it demeans everyone who is running for public office. Just because Stephen Harper wants to change Canada, it doesn’t mean he hates the country. Just because Alison Redford, or Raj Sherman, or Danielle Smith want to change Alberta, it doesn’t mean they hate Alberta. These people are all running because they want to make a difference. Does anyone seriously think they would give their lives to serving a province and people they hate?

But what really baffles me about this attack is that it’s incredibly stupid politics. Smith wants to replace a 40 year government and she’s trying to define herself as the “anti-change” candidate? That completely blows my mind. After all, if you go to Danielle Smith’s website, the very first words that greet your eyes are “It’s Time for Change“. 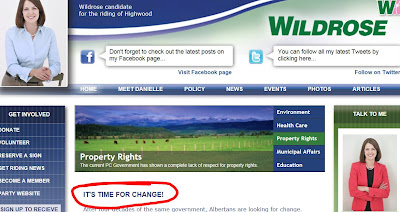 With the Wildrose Party soaring, the game plan should be simple: photo ops of Danielle Smith with cute animals, and talk about the good things she’d do as Premier.

If she continues with these petty childish attacks, voters are going to take her message that change is bad to heart.