Moment of the Decade: #1 The Merger 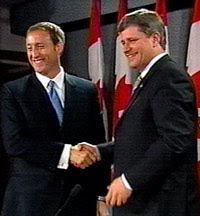 The right wing merger didn’t get a lot of Canadians excited. There weren’t protests in the streets. Canadians outside the Ottawa bubble may not have even been aware it was going on. If they did, few immediately recognized it as the game changer that it was – after all, right wing parties in Canada changed their name and their leaders every few years. And it seemed unlikely they would even change their leader this time. 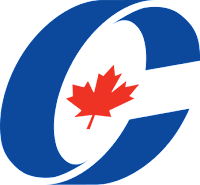 So former future Prime Minister Bernard Lord and a slew of other high profile candidates yawned and took a pass, letting Stephen Harper walk over Belinda “Bake a Bigger Economic Pie” Stronach and Tony “Never Get Tired of Losing” Clement. Most assumed Stephen Harper could never become Prime Minister – hell, he was the Canadian Alliance leader. And he was from Calgary. We all knew Ontarians would never vote for him. The thought of Quebecers doing that was laughable.

Because, after all, the Alberta firewall guy was up against the Paul Martin juggernaut. One of Martin’s top Alberta organizers was going around the 2003 leadership convention telling everyone that, merger or no merger, the Liberals were going to win 9 seats in Alberta next election. I still have my Paulberta t-shirt, as an ironic keepsake. Everyone just knew Paul Martin was going to win 200 seats. It turns out he barely did…it just took him 2 elections to do it. 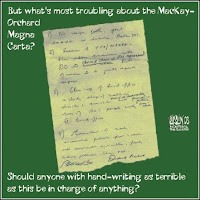 So it’s fair to say the merger didn’t really grip the nation the same way the coalition or the Stronach floor crossing did. Sure, we enjoyed watching David Orchard and Joe Clark huff and puff. Scott Brison joining the Liberals was kind of interesting, but all it did was reinforce the feeling that a Martin landslide was inevitable. Let’s face it, this wasn’t political theater of the highest caliber.

But in retrospect, it proved to be one of the most important events of the decade. Because, to pick a moment of the decade, you really need to think about what the decade was all about.

The story of the 90s was the Liberals balancing the financial and national unity books. The story of the 80s was Brian Mulroney’s rise to power and what he did there. For the 00s, the overarching political narrative was the fall of the Liberals and the rise of Stephen Harper. The event that made it all possible was the merger.

And that, is why I suspect it was voted the political moment of the decade.

You can see the full results here. Thanks to everyone who voted – I had a lot of fun with this one, and I must say the final list is very close to the top 10 list I’d have produced if I did this myself.

Political moment of the decade
You are not authorized to see this part
Please, insert a valid App ID, otherwise your plugin won’t work correctly.