It’s that time of the year again, when Christmas cards and year-end letters start arriving in the mail. I’ve managed to get my hands on the letters being sent out by all party leaders and will be posting them here over the next week. First off, the Prime Minister.

It’s been another great year despite these grave economic times, which we are only now coming out of thanks to Canada’s Economic Action Plan. I guess you could say, we all get by with a little help from our friends.

I was able to travel a lot this year, representing Canada internationally at the G8 summit in Italy, and learning more about the country I have lived in my entire life during visits to Iqualuit and the Tim Hortons Donut Innovation Centre. Some Canadian political leaders (and I won’t name names) have said they are ashamed to be from Canada, but not me – I’m always amazed at the great things Canadians can accomplish when we put our mind to it. For example, did you know there is now a triple chocolate donut? 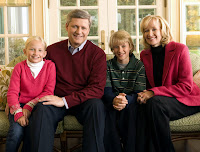 As you’ve no doubt read in “Hot or Not”, Laureen has also been quite busy this year, feeding homeless kittens and supporting the arts community (que j’aime aussi!). In October, she arranged for me to play the piano with Yo Yo Ma, in a spontaneous and non-calculated show of my humanity (the video is available on most government of Canada websites if you haven’t seen it already).

As for Ben and Rachel, I’m quite proud of my offspring. Like his dad, and most suburban swing voters, Ben has a strong affinity for hockey. Which reminds me, I’m still hard at work writing my book on hockey history. (Fun fact: Did you know there used to be a team in Hartford?)

Finally, if you’re still looking for the perfect gift for that special someone of the opposite sex, may I suggest making a 50$ contribution to the Conservative Party of Canada. Your donation will help us fight the tactics of the un-elected an un-democratic Liberal Senators who are stalling my aggressive get tough on crime legislation. I’m not saying Canadians will die this Christmas because of these Liberal Senators, but can we really take that risk?