A big thanks to everyone who sent in pictures or posted them on their own blogs. Let’s begin the photo round-up with the CP wire story’s winner and loser: 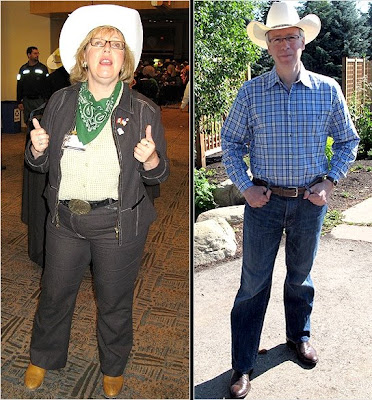 And with good reviews from the Alberta media scarce during his time there, who can fault the LPC from pouncing on this and making it the top story on their weekly e-brief:

Liberal Leader Stéphane Dion attended the Calgary Stampede last weekend, where he was named the best dressed political cowboy. Wearing boots, blue jeans, a fitted plaid shirt, topped off by a broad-brimmed cowboy hat, Mr. Dion looked like a true cowboy as he walked the grounds of the stampede, meeting with Albertans.

Dion also gets top tough guy Clint Eastwood points for walking into a wild west town, knowing that everyone was gunning for him. So I’ll second the consensus and name him “best dressed” for Stampede 2008, taking the title from last year’s winner, Harry Chase.

As for the green party leader? Mayday mayday! Call in the fashionistas! Since Liz has gotten a lot of flack for the above picture, I will post a slightly more flattering one of her from Sunday. May also gets Clint Eastwood points for wearing the Canada-USA pin, something no other party leader in Canada would ever be gutsy enough to do: 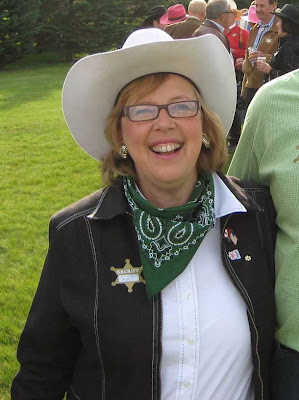 So what about the Village Person? Well, his psychic may have dropped the ball on giving him the Maxime Bernier heads up, but she’s earning her paycheck in the fashion advisor role. Unlike the nerdy Quebec professor, who benefits from low cowboy expectations, Albertans expect a lot of their local PM and ever since leathervestgate, Harper has actually done a good job at looking presentable during the 15 minutes of public appearances he puts in every Stampede. In this picture, Steve gets into the spirit of things by giving a handshake so friendly to a little girl, you’d think she was his daughter. 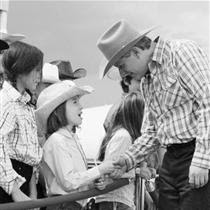 Another Albertan on the hot-seat following his “Alberta Stampede” comments last year was Ed Stelmach. Now, after winning 72 seats in March, Stelmach could show up wearing nothing but a belt buckle and it probably wouldn’t matter much. Come to think of it, wearing nothing but a belt buckle might have been better than this random mish-mash of clothing: 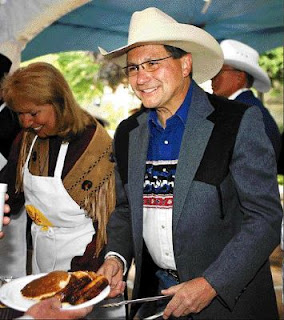 So what about those trying to replace Ed as Alberta’s top cowboy? Well, politics are always at play during the stampede and with the ALP leadership race on, this year was no different. Saturday morning saw David Swann’s breakfast go head-to-head against the federal Liberal one. For the first time in a while, Liberal MLAs visited the federal breakfast, with Dave Taylor, Darshan Kang, and Kent Hehr eating pancakes with Dion. Meanwhile, the Swann breakfast drew 2000 hungry Calgarians, among them Harry Chase. Still, in our fashion review, we must give Taylor the win over Swann: 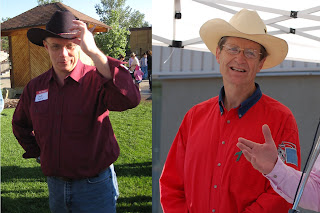 Last year’s winner of “worst dressed” for a bizarre animal sweater vest, Carolyn Bennett was much improved this year. I’ll give her credit – she stampedes every year and appears to have an extensive western wear wardrobe, which isn’t bad for a Toronto gal. She’s pictured bellow with newly elected MLA Kent Hehr: 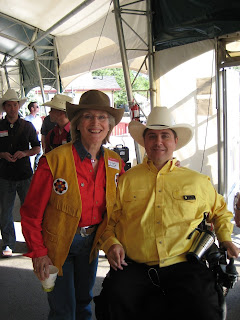 Finally, the Liberal candidate looking to replace Myron Thompson in Wild Rose, Jen Turcott, sports a stylish cowgirl outfit. A good try, but how could anyone look better than Myron in western wear? 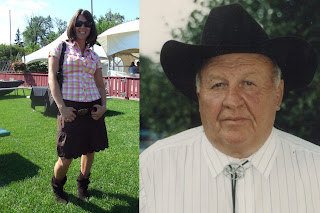