Everyone seemed to enjoy last summer’s Stampede fashion review so, after hitting all the major breakfasts on the first weekend, I’m pleased to present my recap of how the big names fared this year. For some historical perspective, the Globe & Mail offers up Stampede pictures throughout the ages. 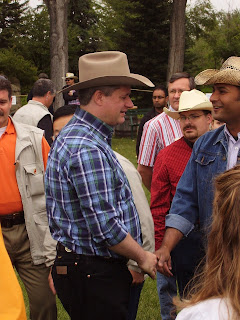 Ever since the disaster of 2005, the nation’s eyes turn to Stephen Harper every Stampede. Last year, Harper hoped in and out of the Hays breakfast in under 20 minutes, wanting to avoid human interaction at all costs. To his credit, this year the PM stayed and posed for pictures for double that time. As for the outfit, Harper looked about as good in western wear as it’s possible for Stephen Harper to look in western wear. Clearly his psychic stylist is earning her money, although it might be time for a taxpayer funded nutritionist.

I caught Prentice at BBQs Saturday and Sunday, and he wore the same outfit on both occasions. It’s also the same thing he’s worn every single day of the 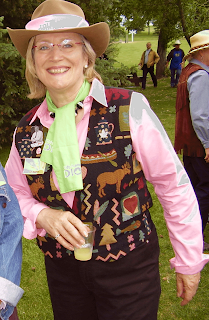 Stampede since, one imagines, his 12th birthday. It’s a good look but it might be time for Jim to mix it up a little bit.

I can’t make fun of Carolyn Bennett for her wild pink outfit since the Stampede has been running a “tough enough to wear pink” promotion to raise awareness for breast cancer. It’s a shame since it would have been really easy to poke fun at her pink shirt, bizarre sweater vest, and green Dion scarf. 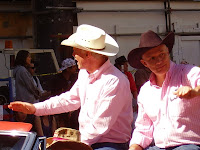 Kevin Taft has been everywhere this week – the Stampede parade 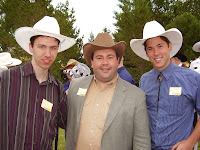 Actual conversation with Jason Kenney:
Me: Hey Jason, you’re in MP – I was hoping to get a picture with you.
Jason: Are you Young Liberals or Young Conservatives?
Me: Young Liberals.
Jason: I won’t hold it against you. I used to be a Young Liberal too.
Me: Yeah, in Goodale’s office. Just wanted the picture because I’ve got a collection of pictures of myself with Tory MPs…I got one with me and Anders last year.
Jason: Ha Ha. Well I’m not as bad as Rob, eh?

And, with that, Jason Kennedy went up about 200% in my books. Admittedly, he was starting pretty low so a 200% increase isn’t a lot, but he’s climbing. 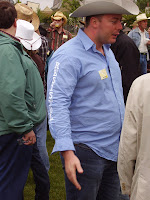 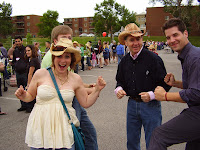 Craig Cheffins, new to elected politics, obviously has yet to learn the “never dance when there’s a camera around” rule. 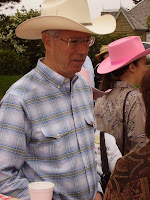 Stephane Dion looked almost the same as he did last year. For a French University professor, he always presents himself surprisingly well at Stampede. 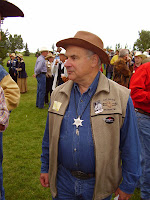 Peter Miliken, a frequent visitor to the Hays breakfast flashes his sheriff badge. If only he could lay down the law in the House of Commons and keep the children in order… 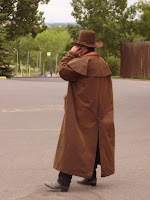 Harry Chase is probably the only politician in Canada who can wear a coat like that and pull it off. The man looks like he’s straight out of a Western and probably deserves “best dressed 2007” for that. That said, it’s never a good sign when you need to identify yourself as an MLA on your apron.

There were also a bunch of other politicians at the Hays breakfast I wasn’t able to track down. Lawrence Cannon was out and about espousing the values of Quebec nationhood to the Calgary faithful (which means he must have felt a bit like Jason Jones in those Molson Canadian commercials). Bill Casey was also shaking hands. Carol Skelton may have been around but since no one alive knows what she looks like, I don’t have a picture (unless she accidentally wandered into one of the other shots).