Thanks to a little help from his friends, Preston Manning emerged victorious last week in the “Best Prime Minister We Never Had” poll. While the contest did help to illustrate the problems of reading meaningful results from any form of Internet poll, I had a lot of fun running it and I hope it helped to shed a little light on some impressive politicians who were never lucky enough to become Prime Minister.

Preston himself was certainly a very well respected individual and I’ve said a few times here that it’s a shame he didn’t toss his name into the race to replace Ralph Klein as Premier of Alberta. He always said what he believed was right and certainly would have implemented a very bold agenda if he had ever moved into 24 Sussex. And, as a Liberal, it’s hard to say anything bad about the man who founded the Reform Party, thus ensuring Chretien a decade of power in the 90s.

I did find the rush to stuff the ballot box for Preston quite interesting. This was especially true in the final when there was a concerted effort for Preston to beat Tory Robert Stanfield. Obviously those on the right saw Manning as the one “true blue” politician in this contest, unlike the likes of Stanfield or Bill Davis. And, if you look at it, it’s hard to find an example of a “true blue” politician becoming Prime Minister or even coming close to the highest job in the land in our history. Mulroney and Diefenbaker both ran to the left of their Liberal opponents to get elected and even Harper, while far from being a Red Tory, had to moderate himself before Canadians would elect him. So, looking back at our history, I think it’s clear that Canada has never been and never will be a “small c” conservative country and that any Conservative who hopes to reach the top must show himself or herself to be a moderate.

Regardless, congrats again to Preston on his win – he’s certainly worthier than a lot of the individuals who have been Prime Minister.

How We Got Here 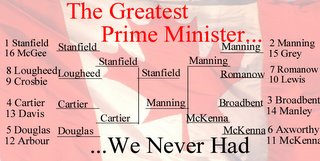 Seeding Round
A field of close to 100 candidates was weeded down to 16. Mike Harris, Mitchell Sharp, CD Howe, and Paul Martin Sr. all missed the cut by a handful of votes.